Energy Market Analysis - 03-07-2013Spot prices went up slightly yesterday as a result of lower supply levels and steady consumption. Solar generation in Germany has dropped by 5GW in the last couple of days but this has been countered by an increase in wind generation of around 2GW.

Near curve contracts made losses at the close of yesterday's session with some contracts losing around 0.60ppt. Day-Ahead fell by 0.30ppt as demand levels are expected to decrease and Front-Month lost 0.15ppt on the back of increasing storage levels. The system was short yesterday which limited the price drops somewhat and there was little change on the far curve with numerous contracts showing no movement. The only contracts to take any real direction were Summer-14 and Summer-15 which added 0.50ppt due to stronger Brent prices. Day-Ahead power closed the session at £48.80/MWh after gaining £0.90/MWh as wind generation is forecast to decrease. Higher Brent also influenced contracts on the near curve while the far curve resembled its gas counterpart with some contracts going down but the majority showing no change.

The system opened 11mcm/ day long as most contracts added to their price this morning with the temporary closure of the Theddlethorpe terminal playing a part. Day-Ahead made a gain of 0.40ppt but further price increases were limited by healthy flows via the Bacton BBL. Brent climbed higher which had an effect on seasonal contracts, with Winter-15 going up by 0.25ppt. Day-Ahead power fell by around £3.00/MWh at the opening of today's session thanks to an improved wind generation forecast. The rest of the curve saw minimal movement with the majority of contracts remaining unchanged. Seasonal contracts were the only contracts to make gains with Summer-15 rising by £0.30/MWh and Winter-15 climbing £0.25/MWh.

Market close data has revealed that the 1-year forward price for commercial gas went up slightly while commercial electricity made a loss - closing at 68.39ppt and £51.70/MWh, respectively. This can be seen in the graph below. 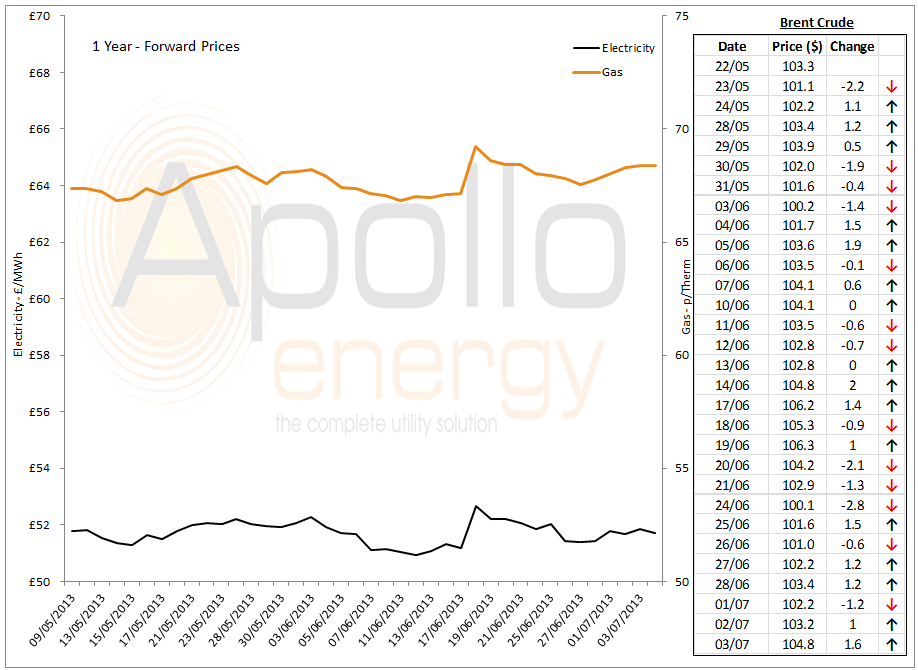 Brent prices made a significant gain yesterday as a result of tensions in Egypt and a reduction in crude oil inventories. Brent 1st-nearby prices went up by $1/b and the WTI price added $1.6/b to go above the $100/b mark for the first time since September last year.