Near-term contracts are expected to remain firm in the next few days as temperatures are expected to improve over the weekend and next week. Nuclear availability is set to be reduced as a number of power plants have had their return dates postponed once again.

Gas contracts made numerous gains yesterday as Linepack opened the session short and made little movement throughout the day. LNG flows via the South Hook terminal were reduced and were 10mcm lower than Friday. Day-Ahead went up by 0.65ppt and the rest of the curve also saw bullish movement following higher Brent prices. Day-Ahead power added to its price but Front-Month made a £0.55/MWh loss, ignoring its gas counterpart. Nuclear generation improved as a number of power plants began operating at full capacity again after initially going offline in the middle of June. Increased wind generation and warmer temperatures prevented any significant gains as the curve remained relatively firm.

The system was 23mcm short at the opening of the session with LNG flows down by 19mcm, leading to an increase in gas contracts. Day-Ahead added 0.50ppt to its price and Front-Month saw a gain of 0.15ppt. Tensions in North Africa have resulted in Front-Month Brent rising above $103/bbl as supply levels could diminish if matters are not resolved soon. Front-Season and Quarterly contracts increased by up to 0.70ppt whereas Winter-14 and Summer-15 registered small losses of 0.05ppt and 0.10ppt, respectively. The power curve took a similar direction to gas as every near curve contract went up with Day-Ahead rising by £0.65/MWh. Stronger Brent and EUA prices helped the rest of the curve turn bullish apart from Summer-14, Winter-14 and Summer-15 which opened at a discount, taking influence from weaker Front-Month APi2 coal prices.

Market close data has revealed that the 1-year forward price for both commercial gas & commercial electricity went up - closing at 68.38ppt and £51.85/MWh, respectively. This can be seen in the graph below. 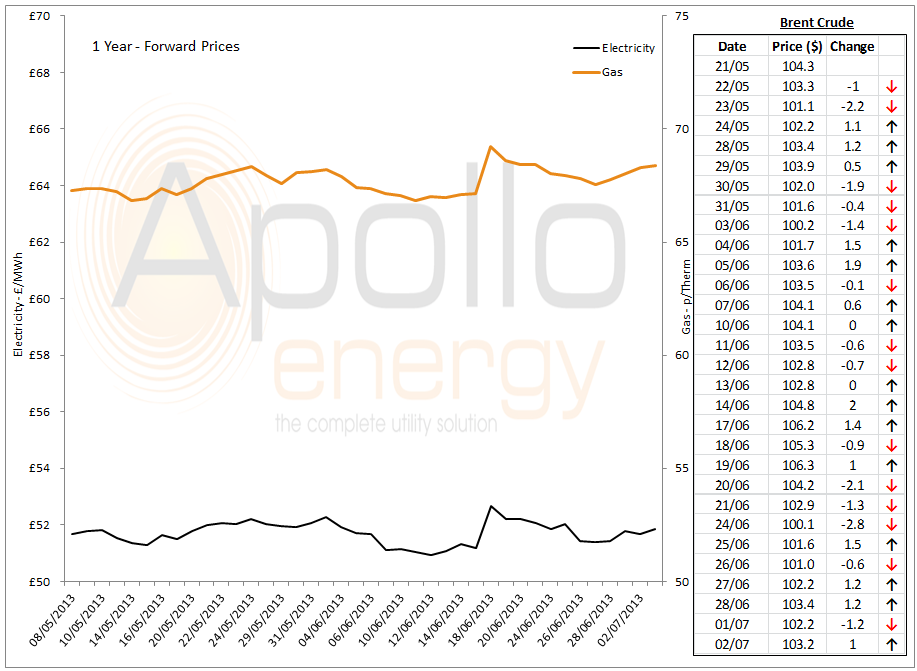