Spot power prices recorded losses yesterday with direction coming from the warmer weather forecast for this month. However, power prices have moved higher this morning and were dictated by stronger gas, although healthy fundamentals could lead to losses later in the session. Gas prices were also bearish yesterday due to healthy supply, a milder weather forecast and a long UK gas system. Gas demand is expected to remain above the season norm until the end of the week which has offered support to prices this morning. Elsewhere, violence has broken out in Ukraine and the ceasefire agreement has been violated which should result in further gains. Today's prices can also be found in an easy to read table on our 'current UK energy price' page.

The gas curve displayed a downward trend yesterday as a warmer weather outlook influenced the majority of prices. Day-Ahead gas shed from its price and took direction from the revised weather forecast in particular, with extra assistance coming from a long UK gas system. Most power contracts followed their gas counterparts yesterday and ended the session at a discount. Weaker Brent also helped to weigh on some contracts and overall generation levels were healthy.

Gas prices have increased this morning despite an expected upturn in temperatures, as an end to the ceasefire in Ukraine has provided fresh supply concerns. Stronger oil and coal also provided some upward pressure further along the curve. Power prices were once again dictated by gas, with gains observed across the curve; the main driver for both markets is currently the on-going conflict between Russia and Ukraine.

Market close data has revealed that the 1-year forward price for both commercial gas & commercial electricity increased - closing at 49.16ppt and £45.53/MWh, respectively. This can be seen in the graph below. 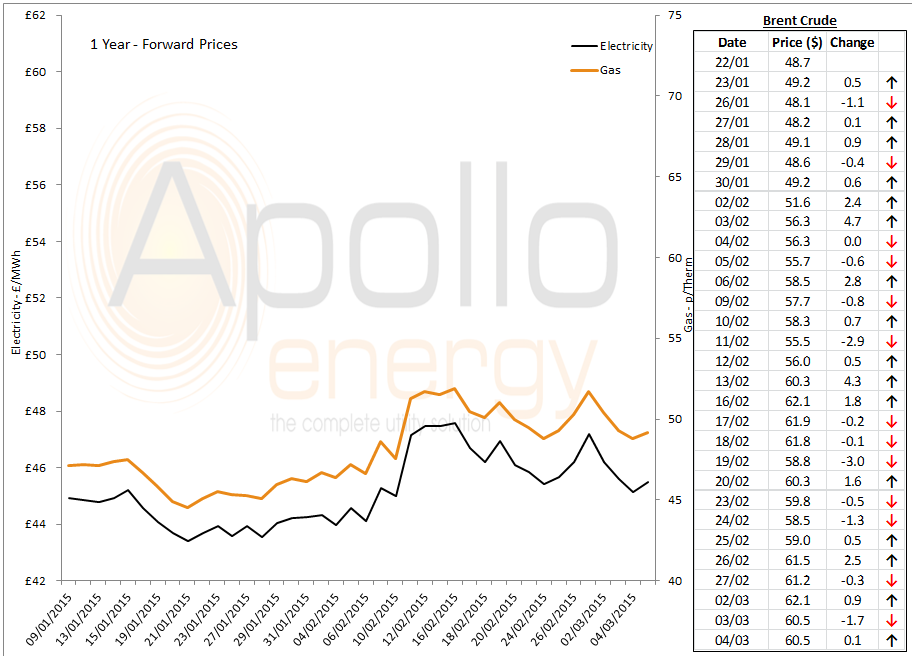 Brent 1st-nearby prices are indecisive at present as the effects of global oversupply are being countered by various reports predicting a rise in demand; Brent remains around $60/b this morning.