Spot power prices continue on a bearish trend as nuclear availability and hydro production remains healthy in Europe. This afternoon the bulls could potentially receive support from the carbon market but healthy supply should result in some stability. Gas prices moved higher on Friday due to weak fundamentals as a result of maintenance at a number of pipelines. UK gas demand is at around 150mcm today which is 26mcm lower than the seasonal norm and supply levels are also strong; downward movement is expected as a result. Today's prices can also be found in an easy to read table on our 'current UK energy price' page.

Gas prices moved higher on Friday morning due to on-going maintenance at numerous facilities in Norway. Flows via the Teesside pipeline were also reduced which provided additional support to the bulls. However, South Hook output remains healthy and a further 2 LNG deliveries are expected this week. The Day-Ahead contract was the biggest mover on Friday and closed at £37.65/MWh due to a much improved wind generation forecast for Monday. Healthy supply levels helped some power contracts to decrease but slightly stronger Brent provided some upward pressure in the afternoon.

Gas contracts took a downward direction this morning with September-14 displaying the biggest loss of 1.45ppt. The UK gas system opened long as supply levels were strong over the weekend despite scheduled maintenance taking place at various pipelines. Storage levels stand at around 93% which has helped Winter-14 and Front-Month to weaken. Power prices also decreased in value as the market looks to correct itself after a sharp rise in prices last Monday. Wind generation levels are expected to halve tomorrow but this failed to have any influence on the Day-Ahead contract which opened at a discount.

Market close data has revealed that the 1-year forward price for both commercial gas & commercial electricity decreased - closing at 55.70ppt and £48.58/MWh,respectively. This can be seen in the graph below. 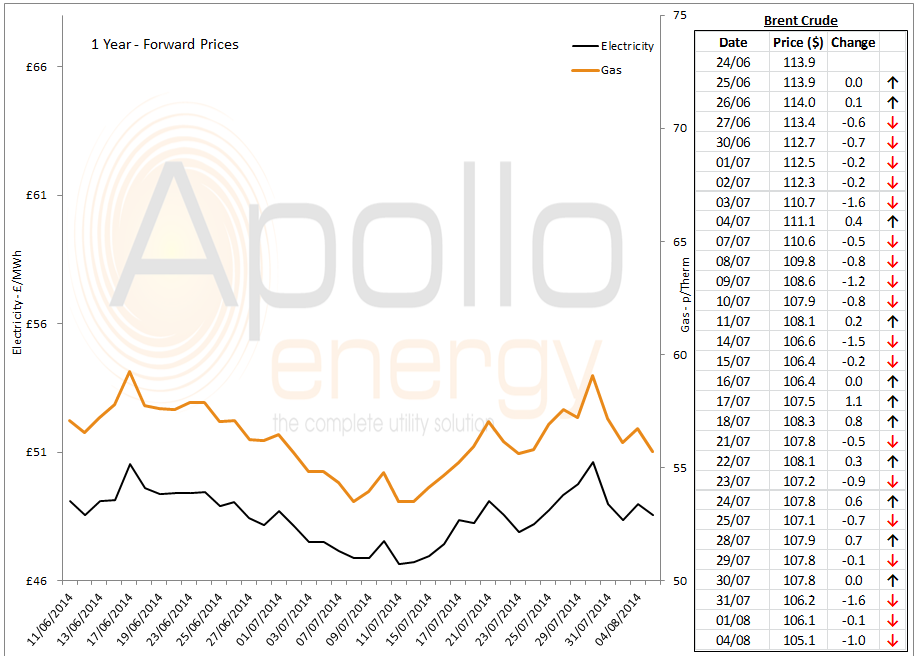 Brent 1st-nearby prices recorded a loss on Friday as a consequence of a well-supplied oil market. Brent now trades just above $105/b after dropping to its lowest point for four months, while WTI is at $98.2/b.