Spot power prices are generally stable at present as healthy solar production is slightly outweighed by lower wind generation and reduced thermal availability. However, some downward movement is expected this afternoon if the carbon markets continue to weaken. Gas prices moved down yesterday following the completion of maintenance at a Gassco field; resulting in increased flows from Norway. After a slight increase this morning, further losses are expected later in the session due to healthy supply levels and low demand. Today's prices can also be found in an easy to read table on our 'current UK energy price' page.

Price-drops were displayed across the gas curve yesterday as Norwegian maintenance was concluded ahead of schedule. The UK gas system was long throughout the session which helped the Day-Ahead contract fall to 37.25ppt. Day-Ahead power closed at a premium due to a lower wind generation forecast and a slight increase in demand. Meanwhile, both the October-14 and December-14 contracts fell 0.35ppt lower, influenced by weaker gas prices.

The UK gas system opened 10mcm short this morning as Langeled flows fell to around 11mcm, although South Hook send-outs remain healthy. Gas storage levels currently stand at 94% and 38mcm of gas flows have been nominated for injection, providing support to contracts. Wind generation levels are expected to rise to around 2GW tomorrow which has helped to weigh on the day-ahead contract. Elsewhere, a gas-fired power plant is expected to return online today which has provided some bearish tension.

Market close data has revealed that the 1-year forward price for both commercial gas & commercial electricity increased - closing at 56.05ppt and £48.73/MWh,respectively. This can be seen in the graph below. 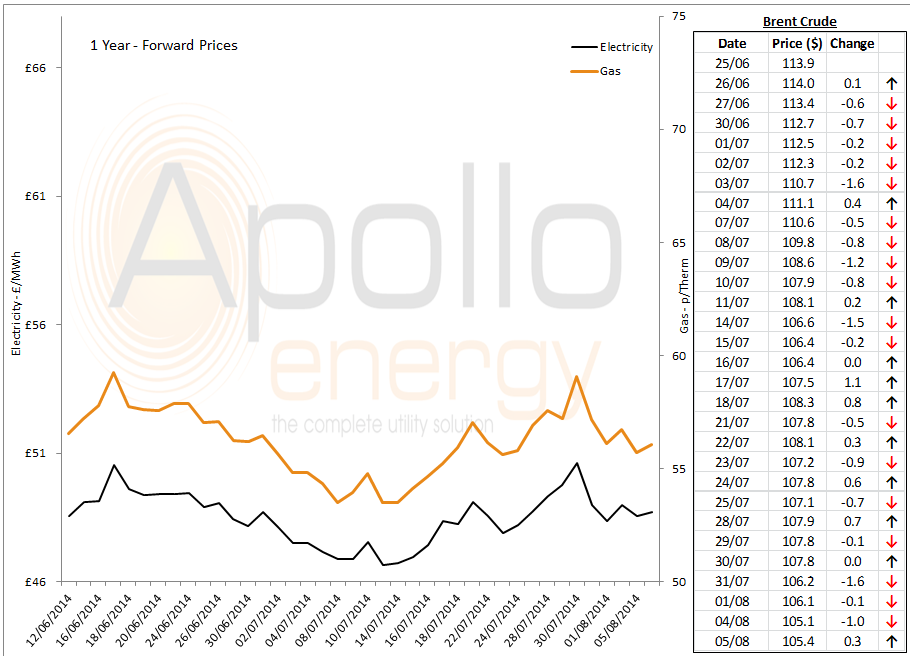 Brent 1st-nearby prices climbed back above $105.5/b yesterday, while WTI also rose back above $98/b. The upward movement is thought to be a result of growing concerns in regards to Libyan, Iraqi and Russian output.