Spot power prices moved lower yesterday due to healthy fundamentals, but a weaker renewable generation forecast for the rest of the week restricted the bears somewhat. A nuclear reactor went offline this morning which further reduced nuclear availability. Increased tensions in Ukraine have also pushed prices higher and a further increase is expected this afternoon. Gas prices were bearish yesterday morning following a rise in Norwegian output but rose in the afternoon as the situation in Ukraine became more volatile. The UK gas system is under-supplied this morning which has offered support to prices, with the crisis in Eastern Europe also pushing contracts higher. Today's prices can also be found in an easy to read table on our 'current UK energy price' page.

The gas curve fluctuated in its movement for most of yesterday's session with most contracts opening at a discount but closing the session higher; direction came from uncertainty in Ukraine. The UK gas system was long throughout the session and improved Langeled flows resulted in healthy supply. Power prices tracked gas on Wednesday although Day-Ahead displayed a loss of £0.25/MWh as UK wind generation was expected to improve on Thursday. Q1-15 was the session's biggest mover, gaining £1.00/MWh by the end of trading; seasonal contracts displayed minimal movement.

Overall gas flows have fallen by 13mcm this morning as imports via the BBL pipeline have halved. As a result, Day-Ahead has climbed 1.30ppt higher with most near-curve contracts opening at a 1ppt premium. Brent strengthened as a result of positive US data and helped towards bullish movement on the far-curve. Wind production is expected to drop tomorrow which resulted in a £0.60/MWh gain for the Day-Ahead contract. Front-Month contracts also rallied higher as a number of nuclear reactors have had their return date pushed back.

Market close data has revealed that the 1-year forward price for both commercial gas & commercial electricity climbed higher - closing at 58.58ppt and £51.43/MWh,respectively. This can be seen in the graph below. 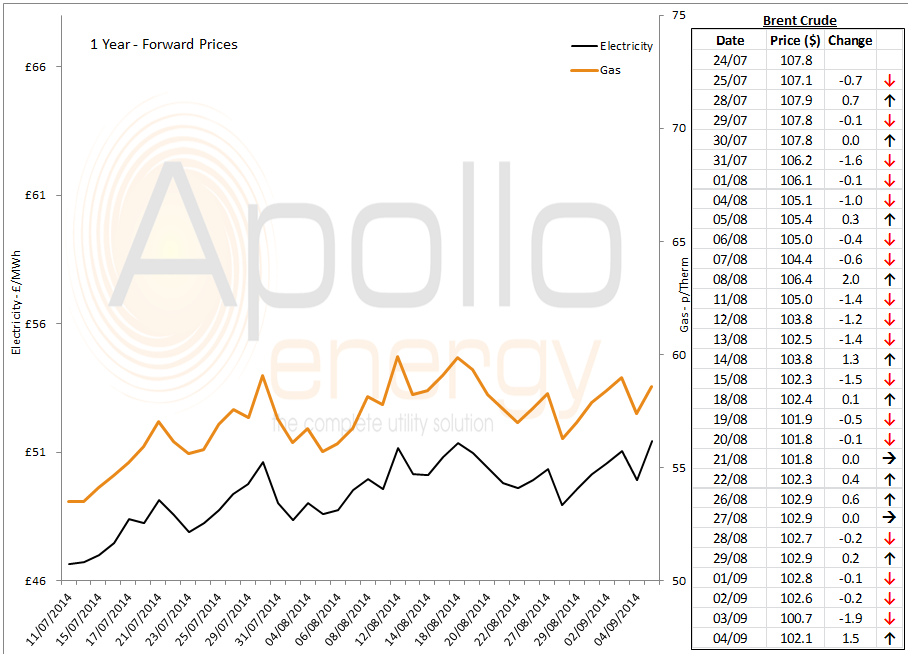 Oil prices climbed higher at the end of yesterday's session and erased any early morning losses. Brent has climbed back above $102/b, while WTI currently trades at $95/b with impetus coming from a break-down in talks in Ukraine and troubles in the Middle East.