Spot power prices climbed higher yesterday due to reduced renewable production and an outage at a nuclear power plant. A drop in prices is expected today with fuel prices continuing to weaken and gas also displaying a bearish outlook. The UK gas system was under-supplied yesterday in preparation for an increase in demand over the winter period. Prices moved down as a result but were limited by a strengthening British Pound. Prices are set to decrease this afternoon as overall gas flows are much improved, while talks regarding a ceasefire in Ukraine are seemingly positive. Today's prices can also be found in an easy to read table on our 'current UK energy price' page.

The gas curve displayed mixed movement this morning with near-curve contracts opening at a discount but seasonal contracts climbing higher. Day-Ahead opened at 48.30ppt, while Front-Month fell by 0.45ppt; gas flows improved as BBL output doubled. Day-Ahead power opened higher as wind generation is expected to remain low over the weekend and the start of next week. Movement varied across the curve as uncertainty in regards to the Ukrainian situation transferred to the energy market.

Market close data has revealed that the 1-year forward price for both commercial gas & commercial electricity decreased - closing at 57.53ppt and £50.70/MWh, respectively. This can be seen in the graph below. 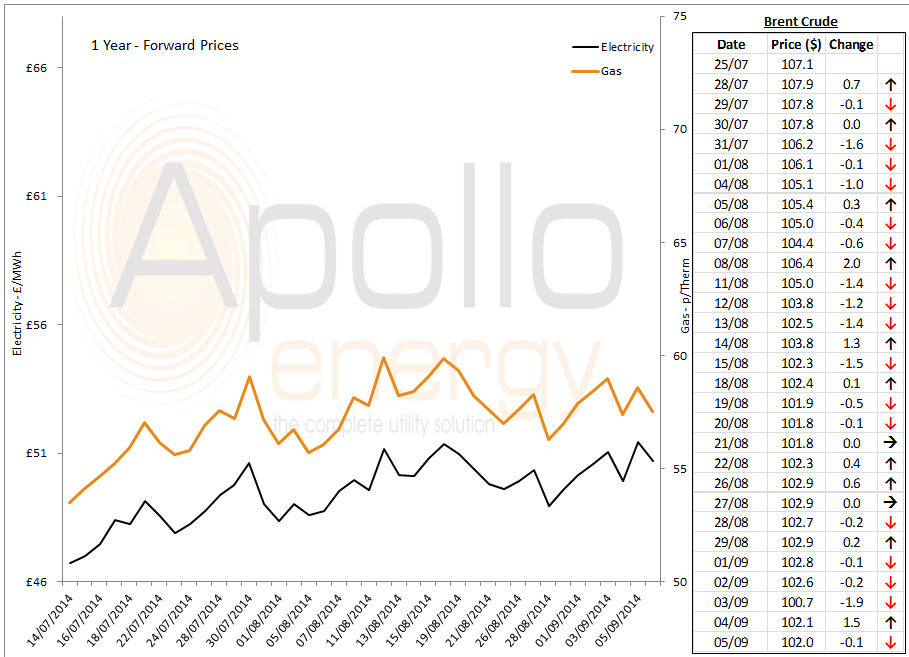 Brent 1st-nearby prices currently trade below $102/b with WTI hovering around the $94.5/b mark. A stronger US Dollar and a slight drop in crude and gasoline stocks are the current market drivers.