Spot power prices continue to be influenced by political issues regarding carbon reduction targets, although its impact thus far is limited. Movement is generally bearish this morning but these on-going talks could provide strong support if an agreement is reached. A slight rise in demand yesterday failed to have much impact on the gas-curve as strong supply weighed on prices. There has been little change to fundamentals this morning with another increase in demand offset by improving gas flows; further price-drops could occur as a result. Today's prices can also be found in an easy to read table on our 'current UK energy price' page.

Downward movement on the gas curve was evident yet again yesterday with the majority of contracts falling in price. The Pound continued to strengthen against the Euro which resulted in a lower demand for gas in European countries; weaker Brent also provided additional bearish pressure. Falling gas contracts weighed on their equivalents on the power curve on Wednesday although these losses were less prominent with an average drop of £0.15/MWh on the near-curve. Day-Ahead was the only contract to display a sizeable gain and added £0.90/MWh to its price on the back of a weaker wind generation forecast.

Gas storage levels in the UK currently stand just below 90% and remain healthy for this time of year. The UK gas system also opened 15mcm long today on the back of healthy supply with gas flows increasing by 20mcm following increased send-outs from the Isle of Grain; bearish movement was visible across the curve. Day-Ahead power fell by £5.75/MWh as wind generation is expected to rise from 1GW to 4GW tomorrow. As for the rest of the curve, most contracts took direction from their gas counterparts once again and opened at a discount.

Market close data has revealed that the 1-year forward price for both commercial gas & commercial electricity decreased - closing at 54.43ppt and £49.73/MWh, respectively. This can be seen in the graph below. 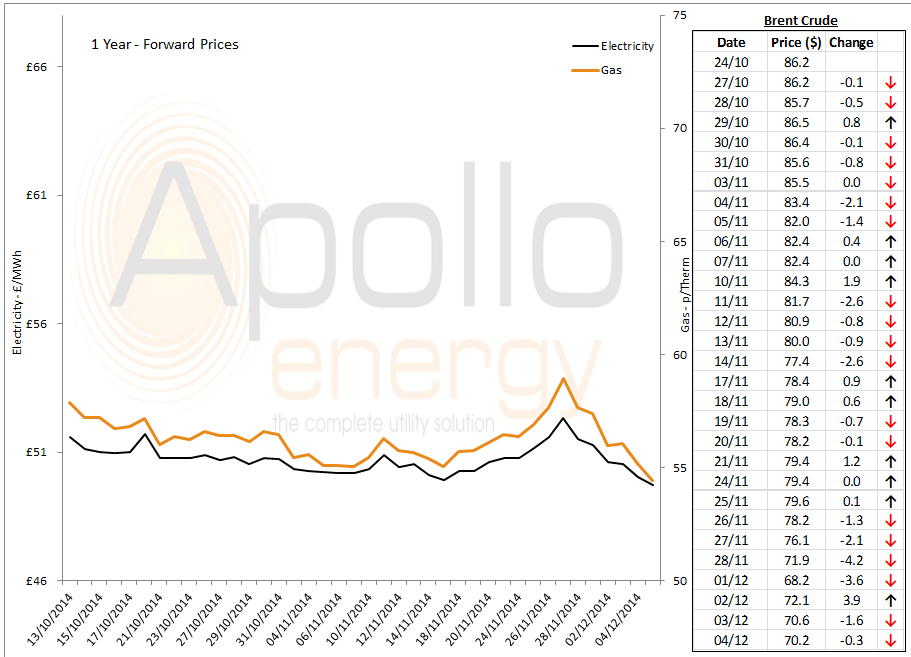 Brent 1st-nearby prices recorded a small drop this morning as market uncertainty is preventing an upward correction in prices. A stronger EIA report helped to keep Brent above $70/b but a further decrease cannot be ruled out.