Spot power prices are generally weaker this morning on the back of an unchanged outlook in terms of fundamentals. However, political meetings regarding climate change action and energy efficiency measures could offer support to prices later in the session. Gas prices moved down yesterday as despite an increase in demand, the UK gas system was long throughout the session thanks to healthy supply. The demand/ supply picture is very similar to yesterday's levels and another bearish session of trading is expected. Today's prices can also be found in an easy to read table on our 'current UK energy price' page.

The gas curve moved down yesterday with near-curve contracts recording losses on the back of comfortable supply. Further along the curve, prices took direction from a revised weather forecast which has predicted milder than expected temperatures over the next week; further weight was also provided by an expected LNG delivery. The revision in temperatures also helped a number of power contracts to decrease yesterday as weaker gas was the main market driver. A number of coal-fired power stations also returned online on Tuesday which helped to support the bearish trend.

The UK gas system opened 11mcm long this morning as overall supply remains healthy, prices on the near-curve moved down as a result. Gas flows have increased by 13mcm with flows via the St Fergus terminal rising by 10mcm. Day-Ahead power opened £2.35/MWh higher this morning as wind generation is set to drop below 1GW tomorrow. The rest of the power curve saw contracts mirror their gas counterparts and open at a discount.

Market close data has revealed that the 1-year forward price for both commercial gas & commercial electricity decreased - closing at 55.18ppt and £50.03/MWh, respectively. This can be seen in the graph below. 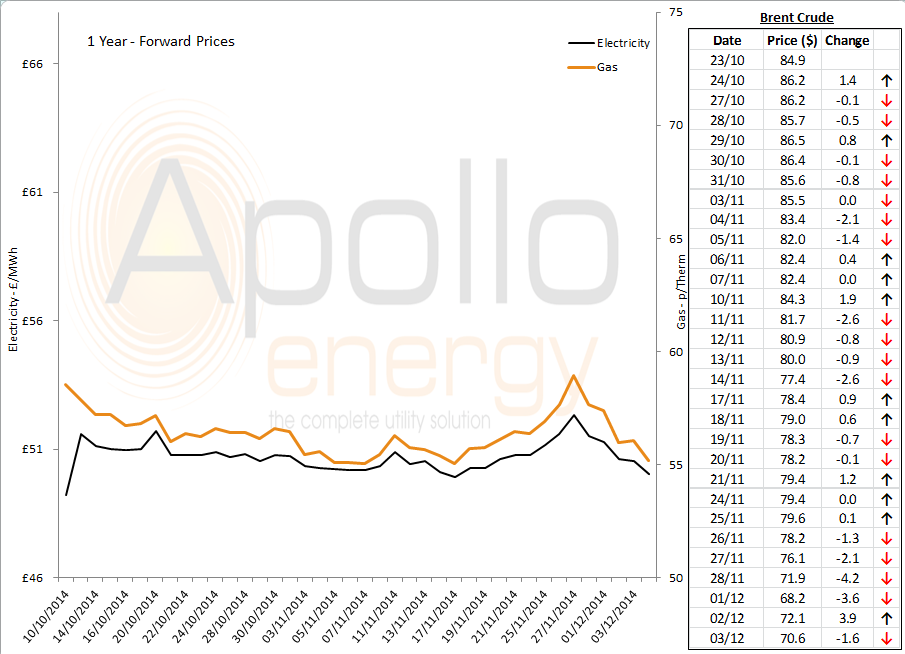 Brent 1st-nearby prices posted losses yesterday afternoon following a strong rebound at the start of trading. News from Iraq has confirmed the global oversupply of oil, while the US Dollar has also strengthened resulting in another drop in price.