Spot power prices are expected to hold firm today as the situation in Ukraine is more stable, helping fuel prices to fall. However bullish tension is expected in the coming days as wind generation levels are forecast to be low, while nuclear production is also limited. Gas prices fell yesterday as tensions in Crimea eased and gas flows in the region were stable. UK LDZ demand has fallen by 10mcm today due to milder temperatures which is expected to continue in the coming days; a further drop in prices is expected today but only a marginal one. Today's prices can also be found in an easy to read table on our 'current UK energy price' page.

The gas curve recorded losses of 0.95ppt on average by the end of yesterday's session following a calmer day in Crimea. Above average temperatures are set to continue and storage levels remain very healthy, helped by the current low demand. Bearish movement was displayed across the curve as Brent also moved down. Day-Ahead power rose by £0.90/MWh despite a healthy wind generation forecast for today. The rest of the curve followed a downward trend due to the fall in fuel costs, with losses as high as £1.50/MWh recorded.

The UK gas system opened long as demand levels fell by around 15mcm, this in turn helped prices decrease across the gas curve. A few contracts fell by over 1ppt including Day-Ahead which opened at a 1.35ppt discount. Power prices took a similar direction to gas with some contracts falling by as much as £0.85/MWh. Day-Ahead was the biggest mover on the near-curve and fell by £3.65/MWh as wind generation is expected to ramp up tomorrow following a few days of low production.

Market close data has revealed that the 1-year forward price for both commercial gas & commercial electricity decreased - closing at 61.47ppt and £49.45/MWh, respectively. This can be seen in the graph below. 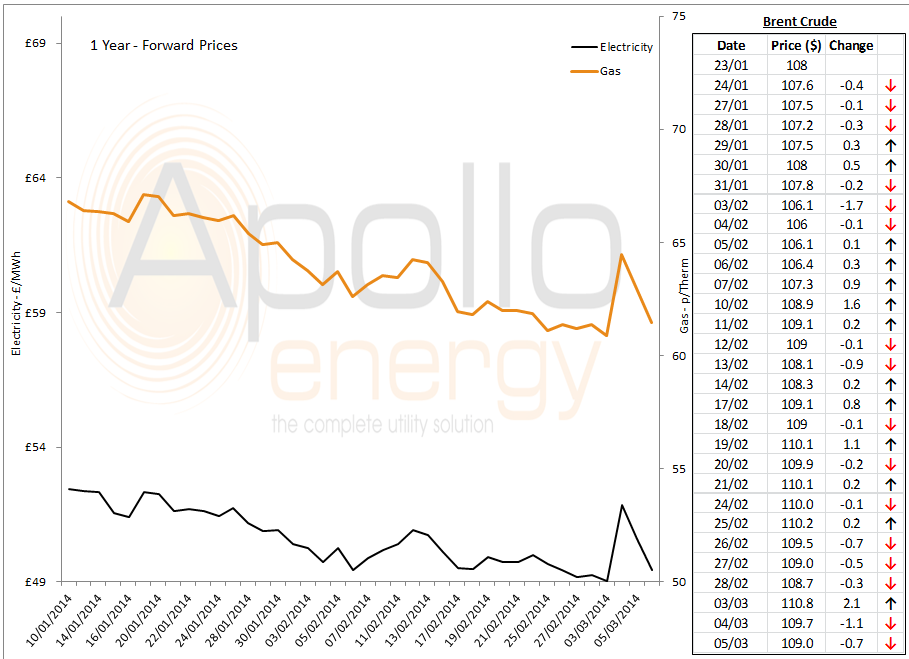 Brent 1st-nearby prices dropped by $1.90/b yesterday as concerns that the conflict in Ukraine could escalate eased. WTI also moved down but the drop was less substantial, falling by $1.59/b which has taken the Brent/ WTI spread to -$6/b.