Spot power prices moved significantly higher yesterday as the curve was dictated by the on-going tensions in Crimea which led to a rise in fuel costs; a drop in German nuclear production also offered support. However a bearish outlook is expected today as fuel prices should correct down slightly. Gas prices were also affected by the Ukrainian situation which led to a sharp rise in commodity costs. Meanwhile demand levels remain low for this time of year and storage levels are very healthy. Downward movement is expected today on the back of falling fuel prices and the healthy supply picture.

Potential conflict in Crimea was the big dictator in yesterday's market as it led to substantial increases for commodity contracts. However, despite major gains in the morning a few contracts registered a loss by the end of the day with Day-Ahead displaying the biggest fall. Power contracts moved in a similar direction to gas although Day-ahead added £1.00/MWh to its price due to low wind generation and slightly cooler temperatures yesterday. On the far-curve some seasonal contracts ended the session unchanged, including; summer-15, Winter-15 and Summer-16.

Gas prices fell this morning as the situation in the Ukraine has stabilised somewhat and any potential disruptions to European gas flows were avoided. Storage levels are currently very healthy for this time of year and the UK gas system opened long this morning as Langeled flows increased to above 70mcm. Power prices fell along with gas as contracts corrected themselves somewhat after yesterday's tensions pushed prices to an unsustainable level. EU Carbon prices also decreased which pushed far-curve contracts down, while Brent shed $1.59/b from its price.

Market close data has revealed that the 1-year forward price for both commercial gas & commercial electricity decreased - closing at 62.98ppt and £50.58/MWh, respectively. This can be seen in the graph below. 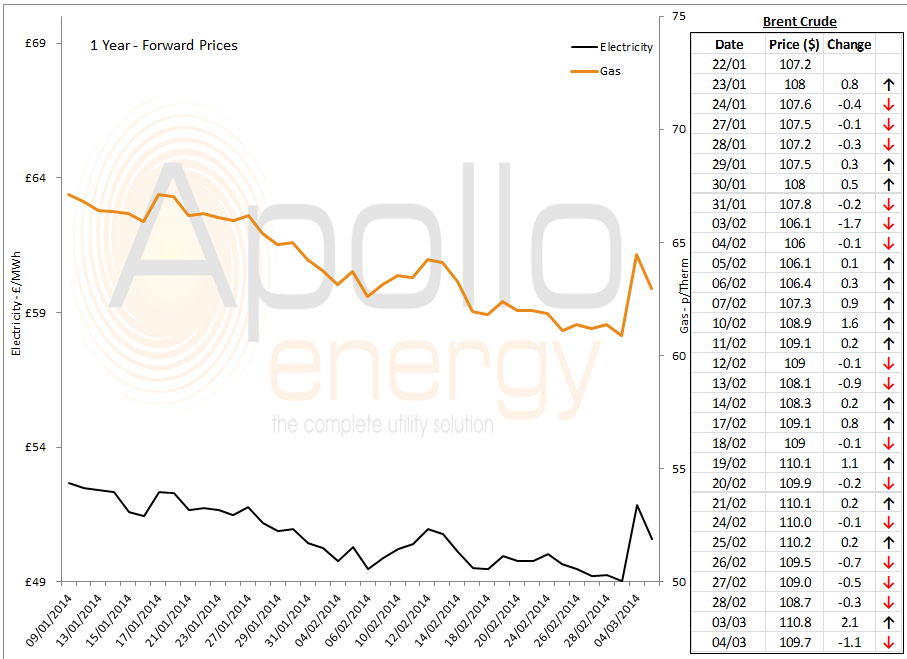 Brent 1st-nearby prices climbed higher yesterday due to the situation in Ukraine which pushed fuel costs much higher. Prices opened at around $110.5/b this morning and further losses are expected as fuel costs move down. WTI currently stands at $104/b which takes the Brent/ WTI spread to below -$7/b.