The continued warm weather and healthy supplies led to Day-Ahead shedding 1ppt from its price yesterday. Maintenance in Norway which has limited output is expected to be completed today which has also helped gas contracts make losses. The Far-Curve saw little change and Brent currently stands close to its 30 day average of $103/bbl. The restart of the Drax Coal-fired plant and a 595MW nuclear plant later this month have helped Front-Month drop to its lowest point since October 2012, currently standing at £47.35/MWh. Further along the curve Winter-13 fell slightly and closed at £54.20/MWh as a result of weaker APi2 coal prices.

Prompt gas prices made slight gains as the current demand led to storage withdrawals being taken from Holford. LNG and South Hook flows are at a healthy 40mcm and further deliveries are expected next week; US oil stock levels have also resulted in Brent crude oil adding $1.5/bbl to its price. Day-Ahead power dropped by £1.40/MWh due to low demand and a forecast of high wind generation of 23GW. On the Far-Curve prices went up a touch as they followed the direction of gas despite falling APi2 prices. Nuclear generation stands at 12GW but is expected to improve when the maintenance at a number of reactors has been completed.

Market close data has revealed that the 1-year forward price for both commercial gas & commercial electricity made small losses - both closing at 67.39ppt and £51.65/MWh, respectively. This can be seen in the graph below. 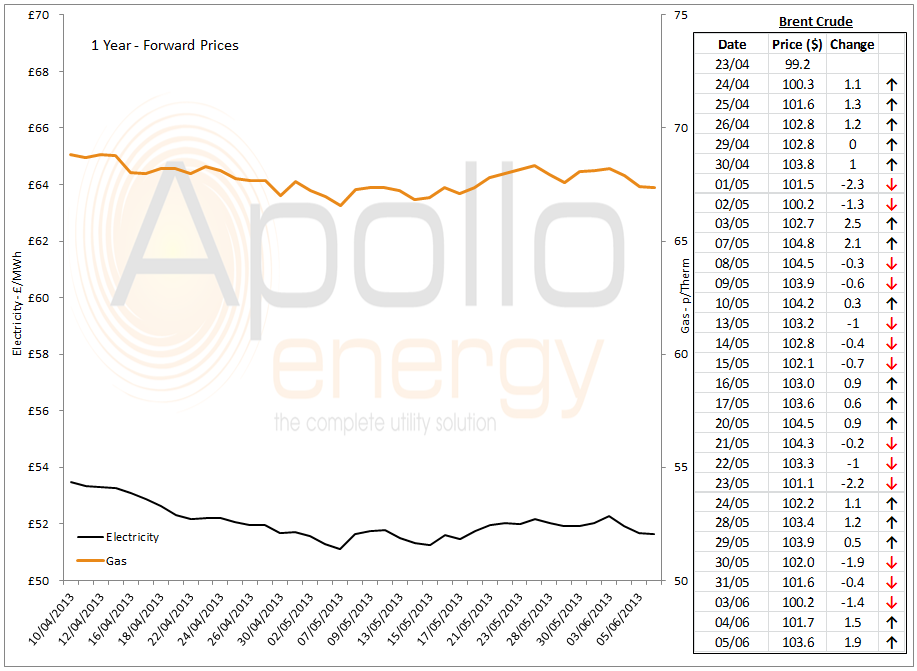 Brent 1st nearby prices and timespreads made significant gains yesterday and the Brent/WTI spread was at -10 $/b. News regarding non-Middle Eastern imports in South Korea was one of the main factors for stronger Brent prices and the Buzzard field is also back in operation which helped the market turn bullish.