Bearish pressure persisted across spot power prices yesterday as the market was divided between the possibility of further weakness towards the end of the week and the prospect of some support next week as temperatures have been revised down. Weak fundamentals and a weaker Euro saw further reductions in Api2 coal, trading down at $62.01/ton. Overall, power markets continued to reach new lows yesterday as fundamentals remain weak.

Gas prices also remained under bearish pressure from the falling oil prices, whilst weak demand, coupled with comfortable supplies pushed prices down further. UK demand is slightly above the seasonal average, however the system remained oversupplied yesterday. An unexpected outage at the Entry Segal pipeline has provided some support to NBP spot prices as deliveries to the UK are restricted.

Spot power prices also continued to fall, though movement on the Day-Ahead prices was restricted by several power plants delaying the time they came live. Further out on the curve, seasonal contracts saw price reductions similar to those seen across the gas curve.

The gas curve opened at a slight gain this morning with Day-Ahead seeing the largest gain - adding 0.65ppt to its price. Support came from Linepack opening 16mcm short as flows were reduced from Langeled. Despite the oil contract falling to $51.52/bbl, seasonal contracts saw gains of up to 0.60ppt.

Power contracts remained on their downward trajectory this morning as demand remains low. Further weakening of Api2 coal prices, alongside a reduction in carbon emission prices, has added additional pressure to the curve.

Market close data has revealed that the 1-year forward price for commercial gas has increased marginally, whilst commercial electricity decreased - closing at 48.37ppt and £46.28/MWh, respectively. This can be seen in the graph below. 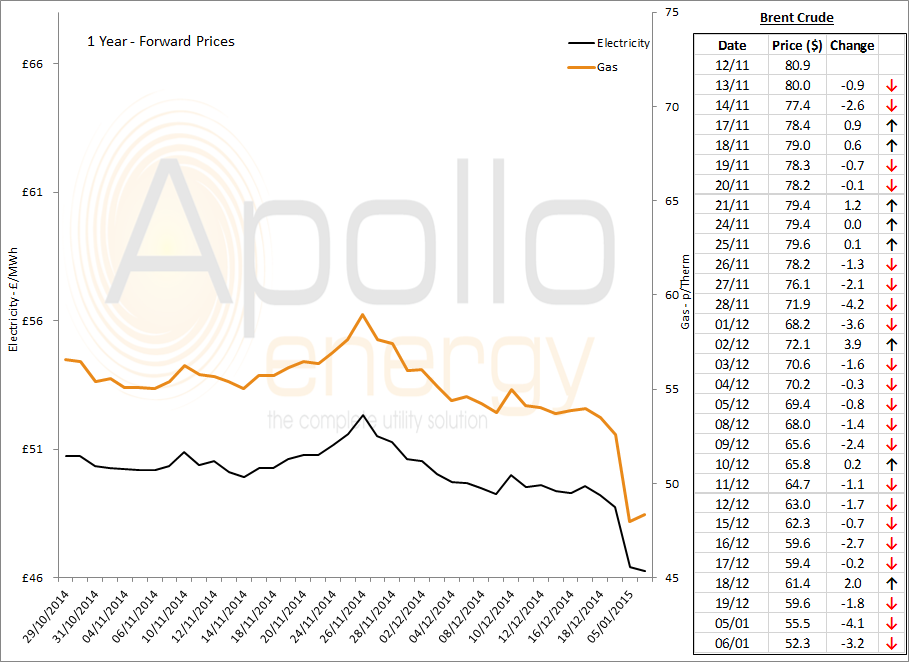 Brent 1st-nearby prices plummeted again yesterday, shedding $3.3/b. Bearish pressure from an oversupplied market, strong US dollar and further cuts in Saudi Arabian official selling prices (OSP) saw Brent set a new 5 and a half year low this morning, dropping to $52.28/b.