Spot power prices have continued on a bearish trend which was evident throughout December, with extremely weak fuel prices the main market driver. Api2 coal prices have plummeted to $64.39/tn which is more than a 7 year low, while consumption levels are also below average. A rebound in prices is not expected this week as fundamentals show no sign of strengthening. Gas prices also decreased further with Front-month, Front-Quarter and Front-Year contracts dropping to record lows at the end of last week on the back of strong supply and weak demand. Temperatures in January are set to remain rather mild in Europe and supply levels are healthy; more losses are expected. Today's prices can also be found in an easy to read table on our 'current UK energy price' page.

There is very little change to fundamentals today which means gas prices decreased once again as milder temperatures, low demand and weak fuel prices have resulted in price-drops across the curve. Power contracts have followed their gas counterparts as the overall supply/demand picture remains bearish and large discounts to coal and oil mean a rebound is not expected any time soon.

Market close data has revealed that the 1-year forward price for both commercial gas & commercial electricity decreased - closing at 47.96ppt and £46.43/MWh, respectively. This can be seen in the graph below. 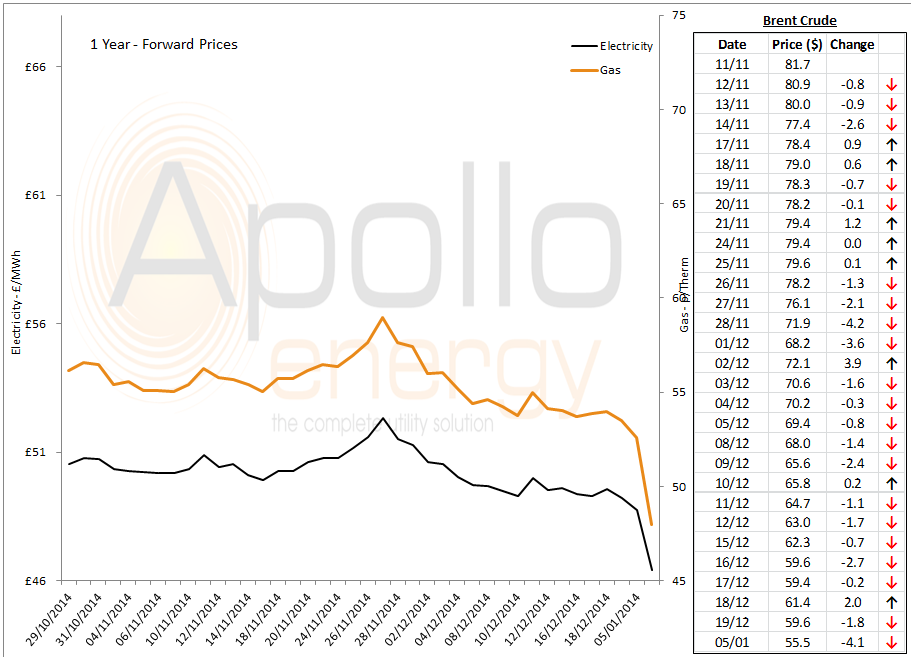 Brent 1st-nearby prices and WTI prices shed $5/b and $6/b, respectively over the Christmas break which resulted in a five and a half year low; Brent currently trades below $56/b, while WTI stands at around $51.5/b.