Spot power prices moved higher yesterday as fundamentals were largely unchanged. Temperatures are set to be around the seasonal average over the weekend which has offered support to the prompt but stronger gas has pushed most contracts higher today. Gas prices increased yesterday as a number of bullish factors influenced the market, namely the colder temperatures and reduced Norwegian supply. Strong gains were recorded yesterday afternoon but this morning has seen a bearish trend develop with warmer temperatures expected next week. Today's prices can also be found in an easy to read table on our 'current UK energy price' page.

Gas prices displayed strong gains yesterday afternoon as high demand and reduced Norwegian flows stretched the system. Numerous outages in Norway were still affecting overall supply, while strengthening fuel prices supported the far-curve. The usual drop in demand on Fridays and the forecast of milder weather helped Day-Ahead power move down yesterday, with improved wind generation further weighing on the prompt. The rest of the curve followed gas with gains displayed by the majority of contracts.

The UK gas system has opened 16mcm long this morning and combined with bearish fundamentals in general, prices are expected to move down during today's session. Storage levels currently stand at 48% with 88mcm set to be withdrawn from facilities. Day-Ahead power recorded further losses this morning with wind generation set to increase by another 1GW on Monday. Brent has recorded significant gains this morning which has helped contracts further along the curve climb higher. Meanwhile, several power plants are expected to return online over the weekend which has provided some downward pressure.

Market close data has revealed that the 1-year forward price for both commercial gas & commercial electricity increased - closing at 48.63ppt and £45.30/MWh, respectively. This can be seen in the graph below. 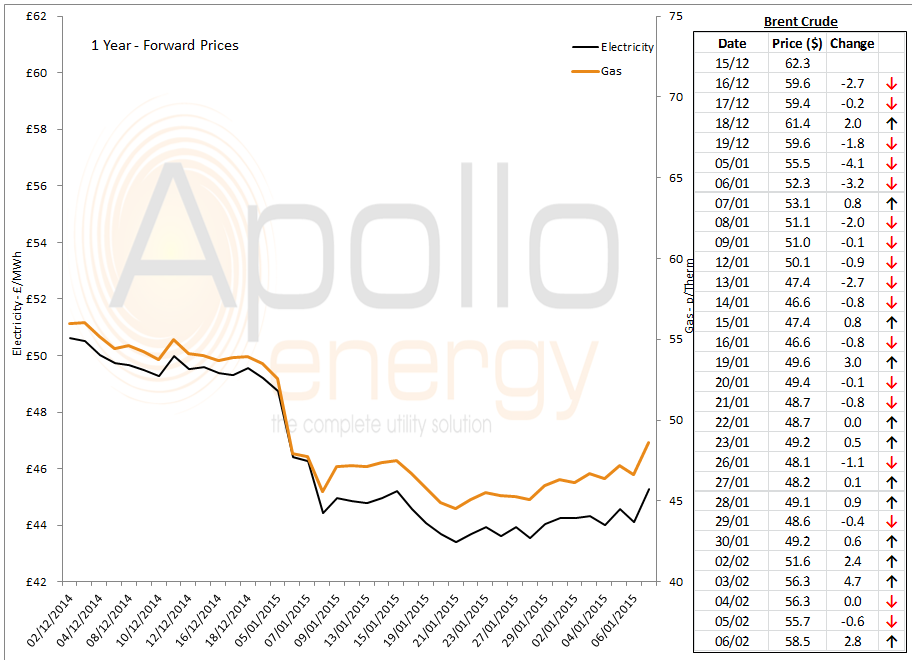 Brent 1st-nearby prices climbed $2/b higher yesterday and have increased by $9/b overall since the start of Monday's session. Further upward movement is expected despite Saudi Arabian price cuts with US data currently driving the market.