Temperatures have been forecast to drop over the next week which has provided support to power prices this morning. Near-curve prices are expected to rise further this afternoon as the restart of a Belgian nuclear reactor has been pushed back. Gas prices continue to move higher on the back of weak fundamentals with some impetus coming from the on-going tensions in Eastern Europe. UK demand remains 13% below the seasonal norm which has provided some support to the bears but Ukraine is the main market driver at present. Today's prices can also be found in an easy to read table on our 'current UK energy price' page.

Gas prices displayed gains across the curve yesterday as the UK gas system was short for most of the session due to on-going maintenance. Demand for gas-fired generation increased slightly due to low wind production. Upward movement was also observed on the power curve as most contracts followed their gas counterparts. Day-Ahead and September-14 both increased by £0.25/MWh, while October-14 and November-14 added £0.30/MWh to their price.

There was little movement on the near curve this morning with Day-Ahead opening at a 0.05ppt premium and Front-Quarter rising by 0.10ppt, despite a long UK gas system. Seasonal contracts displayed more prominent gains with Summer-16 adding 0.60ppt to its price. Day-Ahead power opened higher this morning as wind generation is expected to fall by around 30% tomorrow. Movement varied further along the curve with November-14 and Q4-14 registering small losses and seasonal contracts rising by as much as £0.60/MWh.

Market close data has revealed that the 1-year forward price for both commercial gas & commercial electricity increased - closing at 56.75ppt and £49.50/MWh,respectively. This can be seen in the graph below. 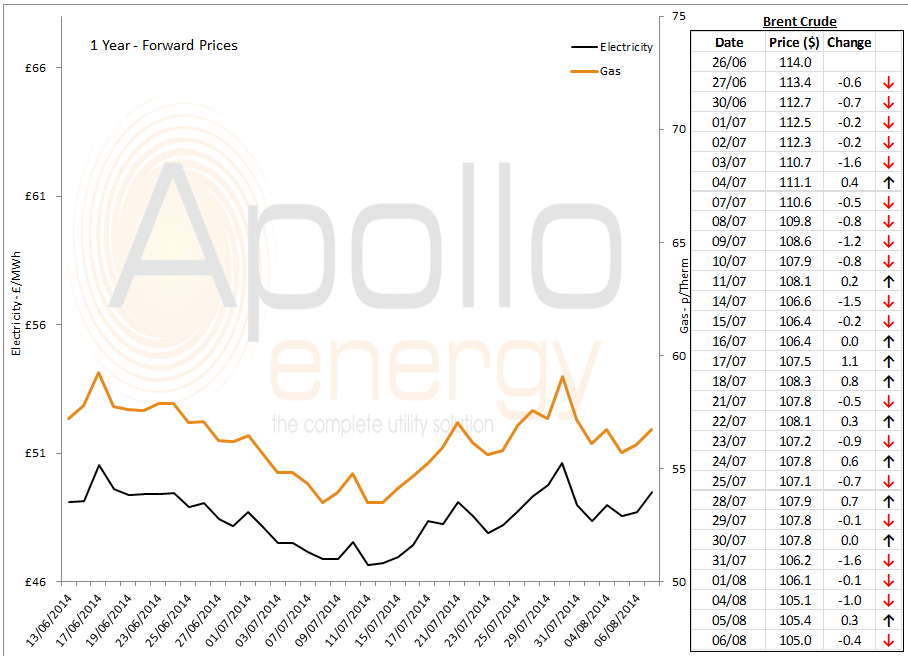