Spot power prices moved down by the end of yesterday's session as demand levels are low and wind generation improved slightly. There is no clear direction for prices today although prices could move higher if carbon contracts are auctioned off and the situation in Ukraine becomes more volatile. Gas prices were supported yesterday by a short UK gas system following a drop in flows, additional support was also provided by a weaker British Pound. UK LDZ demand has reached its lowest point in 2014 and fell by a further 6mcm. However prices could move higher this afternoon as Brent is expected to strengthen. Today's prices can also be found in an easy to read table on our 'current UK energy price' page

Gas contracts closed at a premium yesterday as Norwegian gas flows dropped to below 50mcm, leading to a short UK gas system for the majority of the day. The British Pound also weakened against the Euro while the political row in Crimea also assisted the bulls. Power prices displayed a rise and took direction from stronger gas contracts on Thursday. Day-Ahead climbed £2.25/MWh higher although the contract was restricted somewhat by a significantly higher wind generation forecast for today.

The gas curve saw a series of losses as the UK gas system opened long this morning as gas flows improved. Langeled flows are almost back to 70mcm while the Rough storage facility is withdrawing at a rate of 36mcm. There was no clear trend displayed on the power curve this morning as Day-Ahead fell by £0.90/MWh and the 2 front-months added £0.05/MWh to their price. An increase in wind production today was the main driver of the Day-Ahead contract although this is expected to fall by around 70% by Monday. Seasonal contracts only saw minor changes with Winter-14 and Summer-16 opening unchanged.

Market close data has revealed that the 1-year forward price for both commercial gas & commercial electricity climbed higher - closing at 62.84ppt and £50.38/MWh, respectively. This can be seen in the graph below. 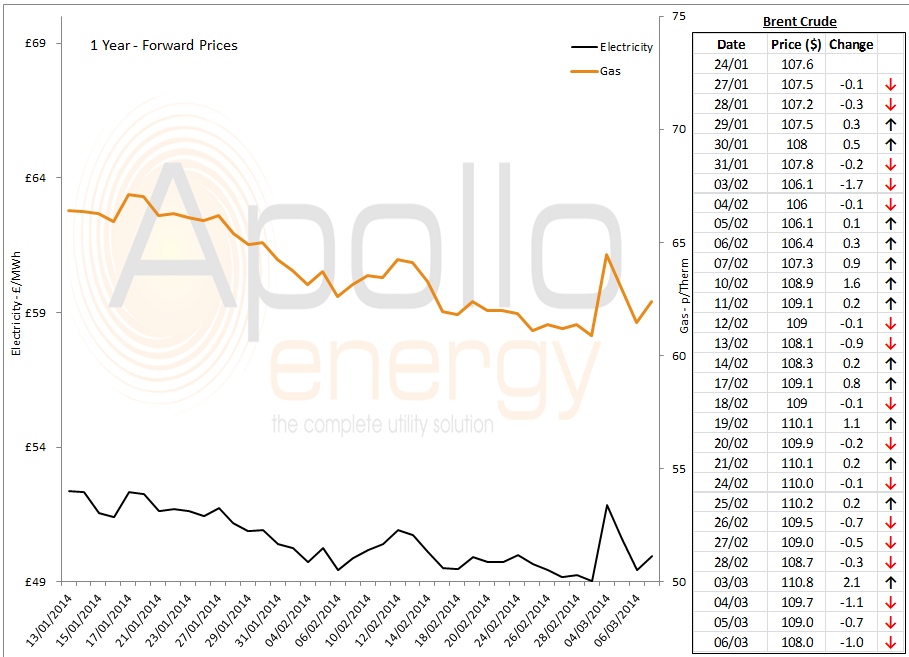 Brent 1st-nearby prices moved $0.34/b higher this morning to open at $108.5/b, while WTI added just $0.11/b. The on-going tension in Ukraine is the main cause for the bullish movement