The milder than average weather is expected to continue throughout this week, although cooler temperatures are expected after the weekend.

As a result, demand is expected to remain low, and the sunny weather will in turn increase the volume of solar energy.

Near curve prices are expected to remain steady, with far-curve prices inching upwards. European markets rose on Friday, due to the Ukraine crisis.   Russia's Gazprom hinted it could suspend deliveries to Ukraine because of its unpaid gas bills.   This fuelled trepidation about a cut in Russian supplies to Europe, adding a degree of pricing volatility to the European markets. A stronger euro against the pound provided support to the British curve.

The gas curve rose at the end of last week, with contracts closing up to 0.55ppt higher on Friday's session. Day-Ahead gained 0.30ppt due to higher demand on Monday, this despite lower temperatures predicted across the UK over the weekend and into the following week. Power prices also increased, as Day-Ahead firmed £2.20/MWh, this was influenced by the usual Monday demand premium, as well as continued low wind levels. Elsewhere on the curve, Front-Month posted gains of £0.70/MWh and Front-Season closed £0.30/MWh higher, tracking movements seen on gas.

Both near and far Gas curve prices have seen gains this morning, with nearer curve prices turning slightly more bullish.   Gas storage levels are approaching 50% as we head into the spring. Emulating the trend of the Gas curve, the Power curve posted contract gains this morning with the continuing geo-political tensions. Firmer carbon prices pushed seasonal contracts up in price, although the forecast of increased wind generation on Tuesday offered support to the Day-Ahead contract.

Market close data has revealed that the 1-year forward price for both commercial gas & commercial electricity climbed higher - closing at 63.75ppt and £50.93/MWh, respectively. This can be seen in the graph below. 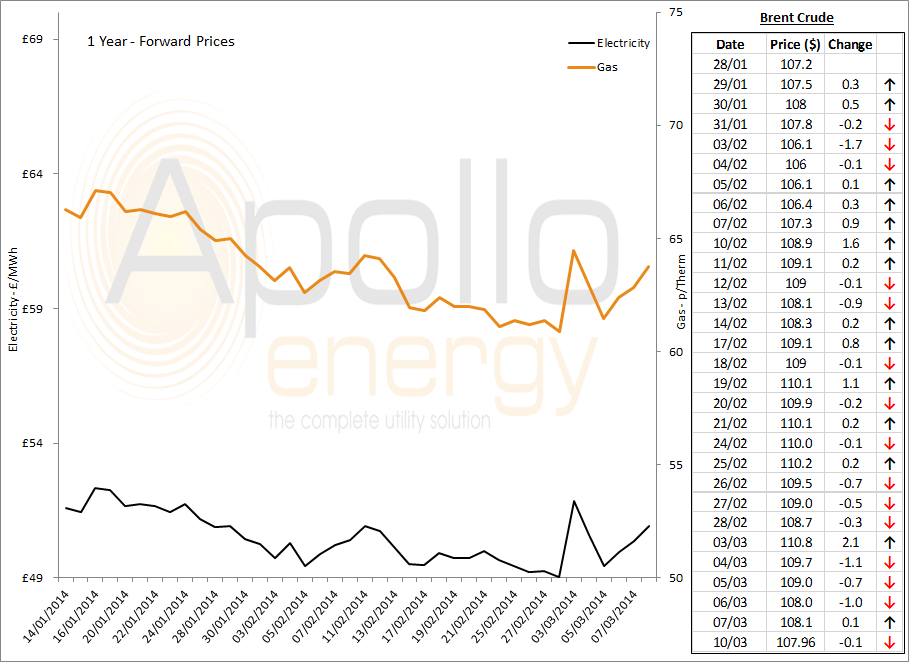 Brent prices finished the back end of last week on an upward trend, reaching $109/b at close on Friday. They have since dropped to below $108/b this morning, fuelled by a fear of a Chinese slowdown after an unexpected fall in last month's export figures.