Spot power prices are expected to climb higher in the coming days, despite slightly stronger wind generation as the weather forecast for this week is slightly colder. Gas prices moved down on Friday as demand levels were low and a further two LNG deliveries have been scheduled. Today UK LDZ demand is unchanged from Friday and remains 20% below the seasonal average. However temperatures are expected to become less mild while Norwegian flows have dropped due to maintenance, which should lead to price increases today and tomorrow. Today's prices can also be found in an easy to read table on our 'current UK energy price' page.

Gas prices gradually climbed higher during Friday's trading session with Day-Ahead increasing by 1ppt and Front-Month closing at a 0.75ppt premium. Bullish tension was also displayed on the far-curve with seasonal contracts strengthening by up to 0.90ppt. The power curve also followed an upward trend except the Day-Ahead contract which fell by £0.50/MWh, following the return of a Scottish nuclear plant. Other contracts followed their gas counterparts with Front-Quarter adding £0.60/MWh to its price and Summer-15 displaying a £0.25/MWh increase.

Gas prices made further gains this morning despite healthy supply levels and low demand. Gas flows in general were practically unchanged from Friday although LNG flows are expected to increase as two deliveries are expected later this week. Winter-14 rose by 0.75ppt as seasonal contracts ignored weaker Brent prices. Day-Ahead power was the only contract to move higher and added £0.25/MWh to its price as wind generation levels are expected to double tomorrow. Gains were also observed on the rest of the curve as Winter-14 rose by £0.55/MWh.

Market close data has revealed that the 1-year forward price for both commercial gas & commercial electricity made gains - closing at 58.79ppt and £49.73/MWh, respectively. This can be seen in the graph below. 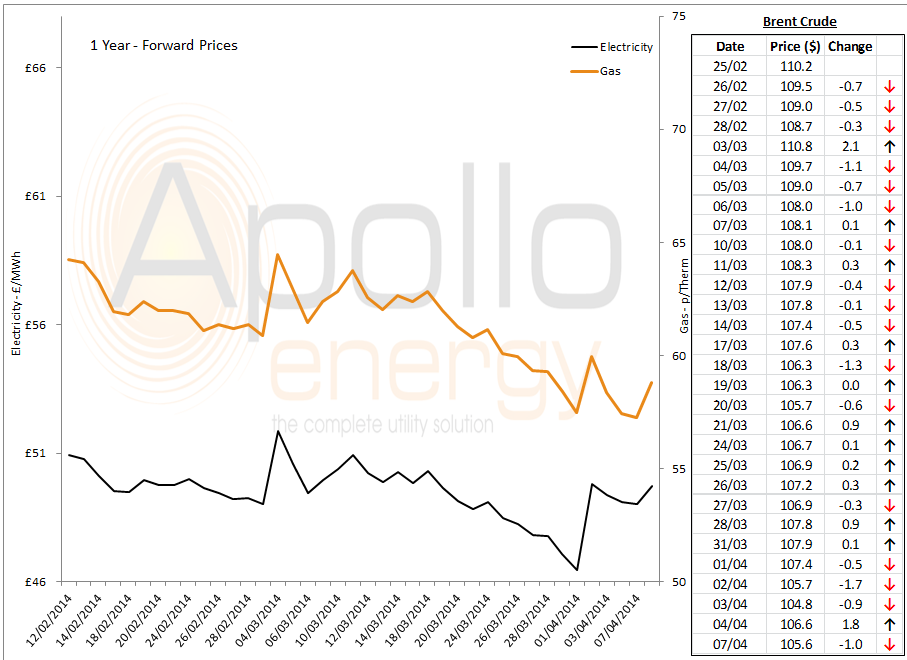 Brent 1st-nearby prices have moved down this morning as supply issues in Libya are expected to be eased today; prices currently stand at around $105.8/b. Meanwhile, WTI is trading at $100.8/b as of this morning which has taken the Brent/ WTI spread to -$5/b.