European temperatures are forecast to turn slightly colder in the coming days although this is expected to be a temporary decrease. As a result spot power prices have continued to move higher with additional support provided by low nuclear availability. Gas prices recorded large gains during yesterday's sessions and this morning as Russian output into Europe is expected to fall due to demonstrations in Ukraine. Demand levels are expected to be around the seasonal average which could lead to further gains this afternoon. Today's prices can also be found in an easy to read table on our 'current UK energy price' page.

Gas prices have strengthened after trading at low levels for a number of weeks as tensions in Ukraine has affected an already weak supply picture. Day-Ahead recorded a 2.05ppt increase as gas contracts on average moved up by 1.73ppt. Power prices followed a similar trend to gas yesterday although Day-Ahead failed to register any movement. Front-Month moved £1.00/MWh higher while Winter-14 added £1.30/MWh to its price, with contracts taking direction from potential supply issues in Ukraine and cooler weather.

The gas curve continued its bullish trend this morning as concerns in Ukraine have grown which led to the Day-Ahead contract rising by 1.40ppt. The majority of the gains were observed on the near-curve with June-14 climbing 1.45ppt higher and Front-Quarter increasing by 1.30ppt. Power contracts opened at a premium as Day-Ahead rallied £0.70/MWh higher and took influence from stronger gas and the decrease in wind generation which is expected tomorrow. Temperatures are also expected to fall marginally below the seasonal average this week which should lead to an increase in demand.

Market close data has revealed that the 1-year forward price for both commercial gas & commercial electricity made gains - closing at 61.35ppt and £50.95/MWh, respectively. This can be seen in the graph below. 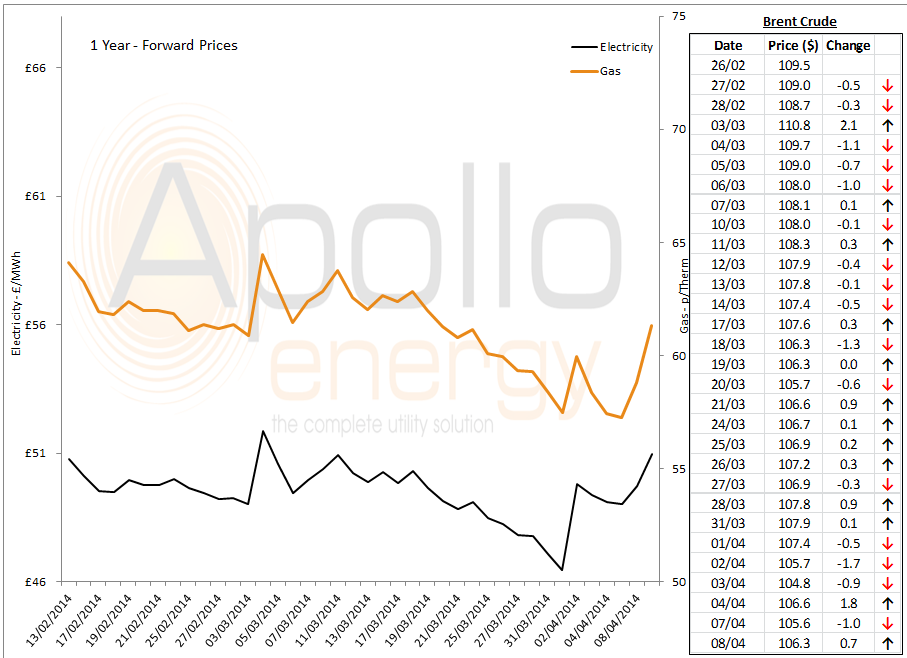 Brent 1st-nearby prices moved down yesterday as Libyan exports improved, although a rebound occurred this morning due to protesting in Ukraine which could reduce Russian supply into Europe; prices are currently trading around at just over $106/b.