Spot power prices ended last week at a discount as an expected drop in consumption over the Easter holidays supported the bears, countering weaker wind production. A revised weather forecast continues to weigh on prices today, with temperatures around the seasonal norm expected over the next week or so. Gas prices moved higher on Thursday due to an outage in Norway which reduced flows in the UK, resulting in a short system. Demand levels are 13% below the seasonal norm today due to mild temperatures and an increase in supply helping towards an oversupplied system; prices have moved down as a result. Today's prices can also be found in an easy to read table on our 'current UK energy price' page.

Near-curve gas prices rallied higher on Thursday following an unexpected outage in Norway, although an increase in storage levels helped to improve the supply situation. Movement on the far-curve was also bullish with further support coming from rising oil prices. Power contracts failed to take direction from their gas counterparts with a weaker demand forecast the main contributing factor. A drop in wind generation offered some support to the prompt but an improved weather forecast for April helped to weigh on most contracts.

Significant losses can be observed on the gas curve this morning as milder weather has reduced demand, leading to a long UK gas system. The overall outlook for this week is bearish as warmer weather is expected in the UK and Norwegian supply levels have improved. Movement on the power curve was mixed as stronger Brent supported contracts on the far-curve and warmer weather helped near-curve contracts to decrease in price. However, prices are expected to correct downwards this afternoon and mirror gas as oil prices are expected to weaken and mild weather should become the main market driver.

Market close data has revealed that the 1-year forward price for both commercial gas & commercial electricity decreased - closing at 47.75ppt and £44.98/MWh, respectively. This can be seen in the graph below. 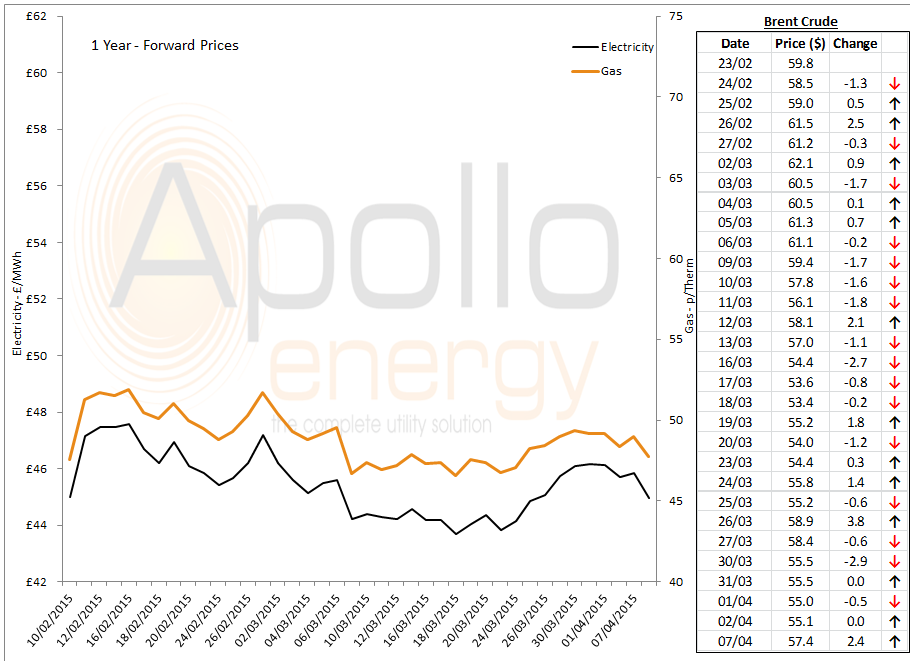 Brent 1st-nearby prices have increased over the last couple of days following an agreement to lift sanctions on Iranian exports; Brent currently trades just under $57.50/b.