Spot power prices climbed higher yesterday afternoon due to an expected drop in renewable generation, despite a mild short-term weather outlook. The gains have continued this morning with German wind generation expected to be less than 1GW tomorrow, while French nuclear power will also be reduced. Gas prices moved down yesterday on the back of an improved weather forecast with demand levels expected to display a drop of 45mcm from last Thursday's levels. Today, gas demand remains below the seasonal average and imports into the UK from Europe are healthy; prices are expected to stabilise this afternoon. Today's prices can also be found in an easy to read table on our 'current UK energy price' page.

Bearish movement was displayed across the gas curve yesterday with milder temperatures helping to decrease demand, resulting in a long UK gas system. A healthy fundamentals picture is expected to last throughout April, despite some scheduled maintenance at gas facilities. The power market displayed losses yesterday morning as a result of milder weather and weaker coal. Temperatures above the seasonal average were forecast for the rest of April and this is expected to significantly reduce consumption.

Gas contracts initially opened higher this morning as a revised forecast predicts that cooler weather could return at the end of the month. Some bullish pressure was also provided by on-going maintenance at the Norwegian Kollsnes facility which will last until the 16th of April. Far-curve power prices have corrected upwards this morning with influence coming from gas, as maintenance at pipelines is expected to affect supply. Stronger Brent has also helped to support some contracts although the prompt has opened at a discount due to low demand.

Market close data has revealed that the 1-year forward price for both commercial gas & commercial electricity increased - closing at 48.25ppt and £45.85/MWh, respectively. This can be seen in the graph below. 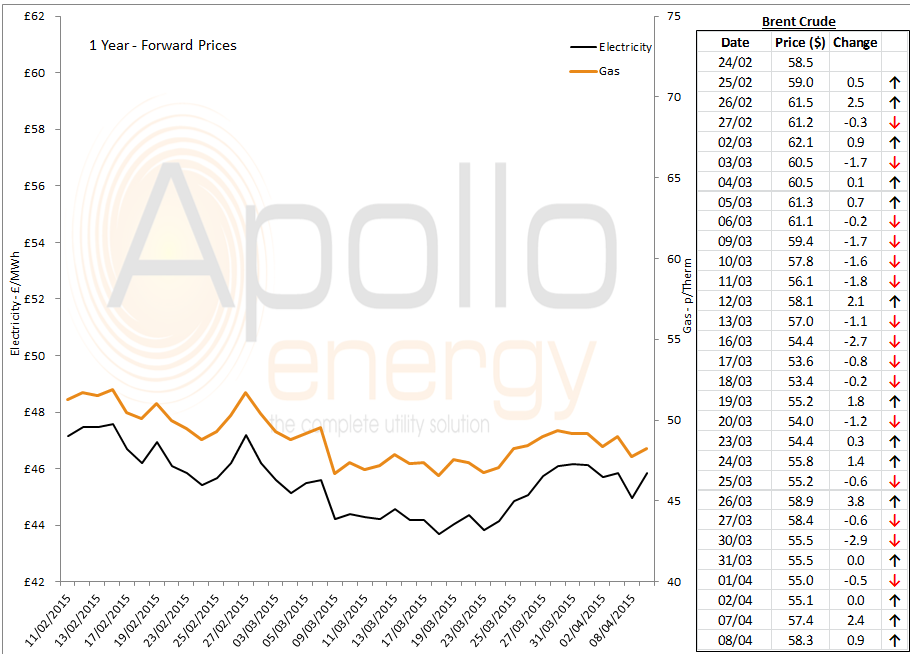 Brent 1st-nearby prices continue to edge higher and now trade at around $58.3/b, although prices peaked above $59/b yesterday with the Iranian deal the main market driver.