Spot prices fell yesterday due to increased supply levels and reduced demand with the warm weather being the main influence on the currently bearish market. A nuclear reactor came back online in Germany which led to improved nuclear supply; availability in France has also increased.

The gas curve remains bearish with Day-Ahead falling by 0.35ppt and August-13 going down by 0.25ppt. Increased Norwegian flows and storage withdrawals led to a long system yesterday which opened the session at 32mcm. LNG flows were also at a healthy rate as the Dragon LNG terminal supported South Hook. Power prices also went down with two nuclear reactors coming back online having an influence along with bearish gas prices. Front-Month and Front-Season dropped by £0.10/MWh while Day-Ahead saw no change.

There was mixed movement on the gas curve this morning with some contracts making gains ranging from 0.05ppt and 0.25ppt, while Day-Ahead made a loss of 0.40ppt. Gas flows saw a slight reduction following a drop in Norwegian flows and storage withdrawals. The system opened 20mcm long despite the reduced flows as demand levels were just under 200mcm. Day-Ahead power fell by £1.25/MWh but the rest of the curve saw no real trend, Front-Month made a gain of £0.10/MWh and Front-Quarter opened at a £0.05/MWh discount. Wind generation increased by 10GW and gas-fired generation fell by 45GWh which led to a 34% share of the generation mix.

Market close data has revealed that the 1-year forward price for commercial gas fell slightly while commercial electricity made a small gain - closing at 67.05ppt and £51.13/MWh, respectively. This can be seen in the graph below. 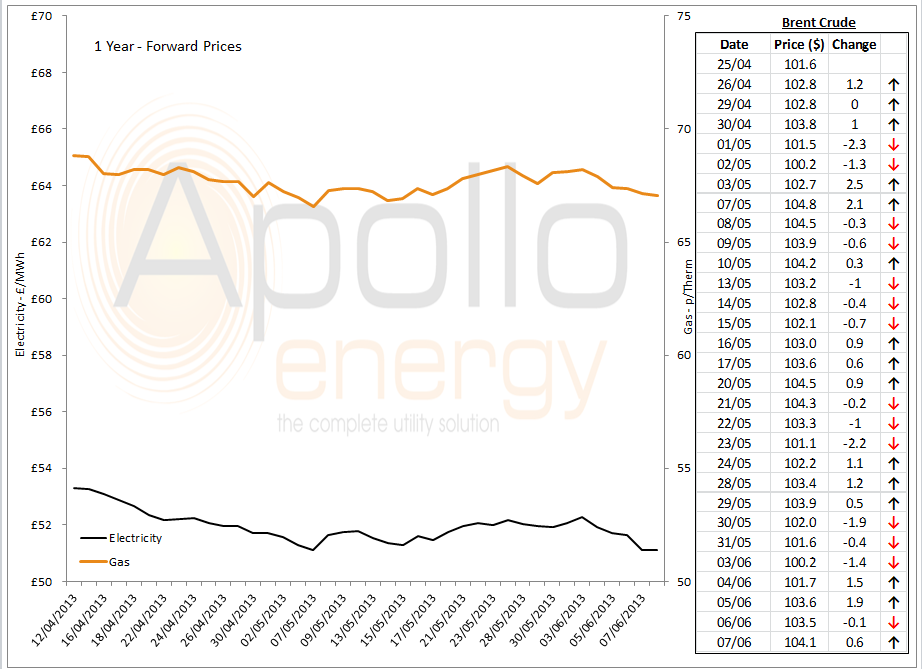 Brent 1st nearby prices made gains but the market is looking relatively steady at present unlike the unstable equity, bond and forex markets. The Buzzard field is expected to become operational again at the weekend and the Ekofisk field has returned online as expected, following maintenance.