Spot prices failed to show any real trend as two nuclear reactors in Belgium came back online but this was countered by a number of unplanned outages in France. Nuclear availability is ample at present but the recent outages have led to week-ahead contracts going up and prompt contracts could also make gains if further reactors go offline.

Day-Ahead gas was at its lowest price since October 2012, closing at 60.2ppt which was as a result of warm temperatures and low demand. Front-Month contracts made losses with LNG imports expected at the end of June, Far-Curve contracts were also bearish even though Brent prices strengthened. Day-Ahead power went up by £0.10/MWh as demand led to high gas-fired generation because of low nuclear output. Front-Month made a £0.15/MWh loss with the forecast of warm weather and high Norwegian flows a major influence. Further along the curve, prices saw little movement with climbing Brent limiting any losses.

Seasonal contracts went up slightly due to rising Brent prices, Winter-13 made a gain of 0.2ppt to open up at 70.9ppt. Day-Ahead went up by almost 1ppt as gas contracts took a bearish turn with an increase in storage injections and exports having an effect. July-13 climbed £0.90/MWh and Day-Ahead went up by £0.15/MWh at the weekend due to the gains seen on the gas curve and low nuclear availability. Seasonal contracts saw mixed movement with Winter-13 adding £0.15/MWh to its price and Summer-14 dropping by £0.10/MWh.

Market close data has revealed that the 1-year forward price for both commercial gas & commercial electricity fell slightly - both closing at 66.83ppt and £51.03/MWh, respectively. This can be seen in the graph below. 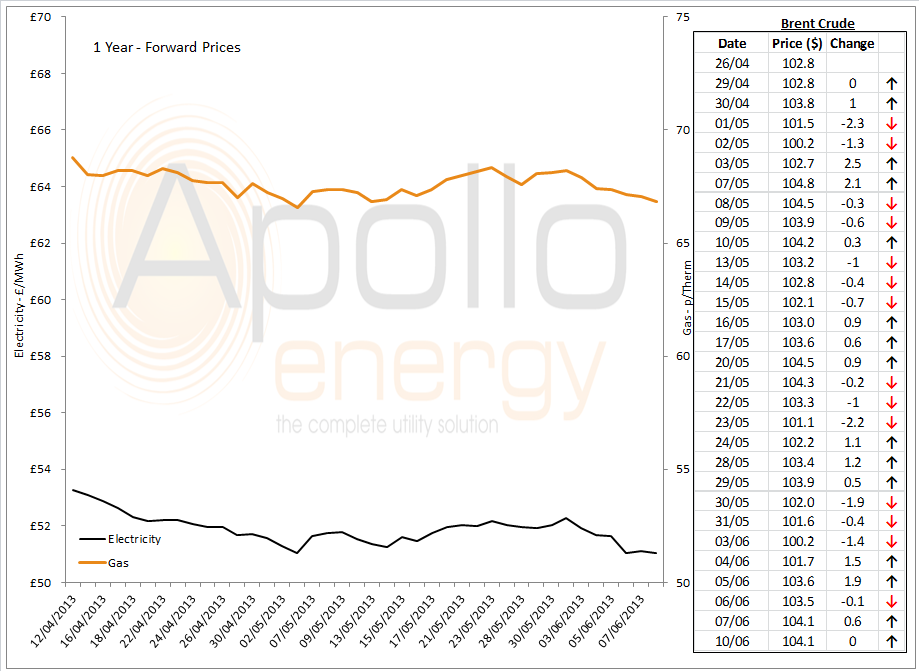 Brent 1st nearby prices went up slightly on Friday due to strengthening equity markets following the release of the monthly non-farm payroll report in the United States. Chinese oil demand was at 9.48Mb/d in May which was a rise of 1.5% from 2012, refinery runs fell by 1.4% this month and crude imports were down by 5.8%.