Spot power prices fell temporarily last week following a German bank holiday and a slight increase in wind generation however prices have now crept back up to average levels for this time of year. In terms of gas, Norwegian supply levels decreased due to an unplanned outage which helped gas contracts climb higher. Today's prices can also be found in an easy to read table on our 'current UK energy price' page.

Gas contracts registered gains on Friday as Langeled flows fell as a consequence of Linepack reaching 30mcm short earlier in the session. The gains were only marginal as the system length became more balanced later in the day but prompt contracts all closed higher. On the power curve November-13 climbed to £52.90/MWh on Friday afternoon and followed its gas counterpart closely. Workers at a Scottish oil refinery have threatened to go on strike; it is one of seven facilities in the UK and hasn't been offline since 2008. A number of nuclear plants should also experience reduced output this week and the Dungeness facility is scheduled to remain offline for most of October.

Prices on the gas curve displayed further increases this morning as Day-Ahead rose to 66.40ppt and Front-Month also climbed 1ppt higher. Gas flows are largely unchanged from Friday as Langeled opened at 41mcm and later rose to 50mcm; demand currently stands at 180mcm which is 20mcm higher than last Monday. Power prices went up despite oil production on the Gulf Coast resuming after a temporary shutdown caused by a hurricane warning on Friday. December-13 made the largest gain of £0.90/MWh while Day-Ahead added £0.50/MWh to its price.

Market close data has revealed that the 1-year forward price for both commercial gas & commercial electricity went up - closing at 66.53ppt and £52.13/MWh, respectively. This can be seen in the graph below. 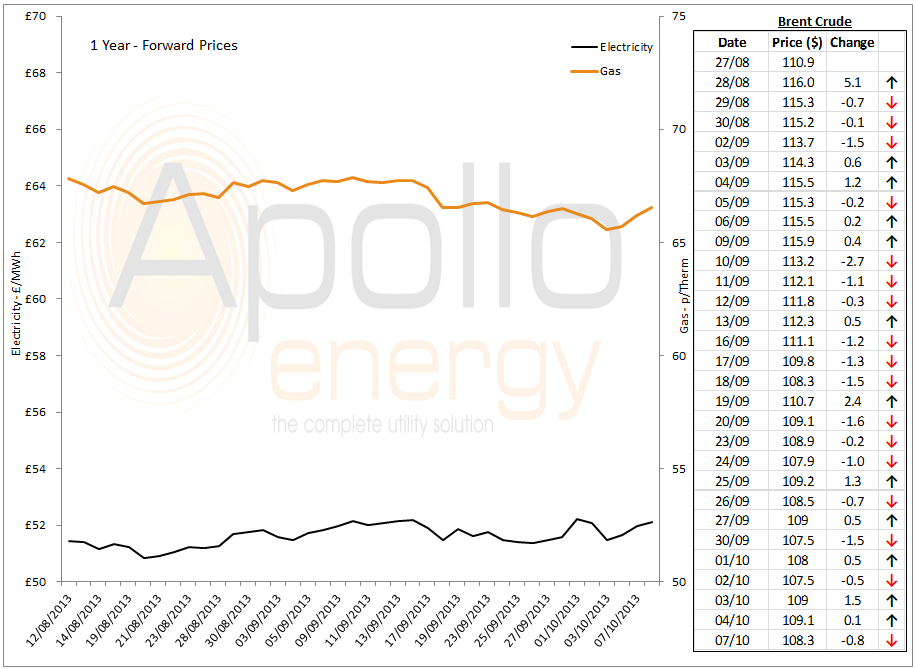 Brent 1st-nearby prices rose to $109.6/b on Friday afternoon on the back of a hurricane warning on the Gulf Coast, although prices then dropped to $109/b over the weekend as oil output reverted back to normal levels. WTI added $0.53/b to its price and the Brent/ WTI spread now stands at $5.7/b.