Spot power prices continue to climb higher due to weak renewable production, solar generation is expected to fall significantly over the weekend and German wind production will also see a significant decrease. Gas spot prices moved down yesterday on the back of ample supply levels and warmer weather although there was mixed movement further along the curve. Meanwhile a drop in Norwegian supply is expected to push November-13 prices higher today. Today's prices can also be found in an easy to read table on our 'current UK energy price' page.

Day-Ahead registered a loss yesterday as mild temperatures and French capacity restrictions at Dunkirk have seen Langeled flows ramp up, resulting in a long UK system. Further along the curve prices decreased with the help of a stronger British pound while NBP storage levels edged above 4bcm. Renewable generation remains low, as does nuclear availability which contributed to Day-ahead gaining £1.50/MWh yesterday. Other near-curve contracts also closed at a premium and took influence from stronger gas and Brent prices.

On the gas curve Day-Ahead increased by 0.75ppt this morning and opened at 64ppt due to a colder weather forecast which should see demand increase. Although an LNG delivery is expected next week at the Isle of Grain facility which will help restrict the bulls. Far-curve prices also moved up despite little change to the wider fuels complex. Power contracts displayed an increase this morning with Day-Ahead climbing £0.70/MWh higher and Front-Month adding £0.35/MWh to its price, stronger Front-Month APi2 coal was thought to be the main factor for the upward movement. Most contracts followed their gas counterparts and moved higher although the German bank holiday meant carbon contracts displayed little change.

Market close data has revealed that the 1-year forward price for both commercial gas & commercial electricity went up - closing at 66.18ppt and £51.98/MWh, respectively. This can be seen in the graph below. 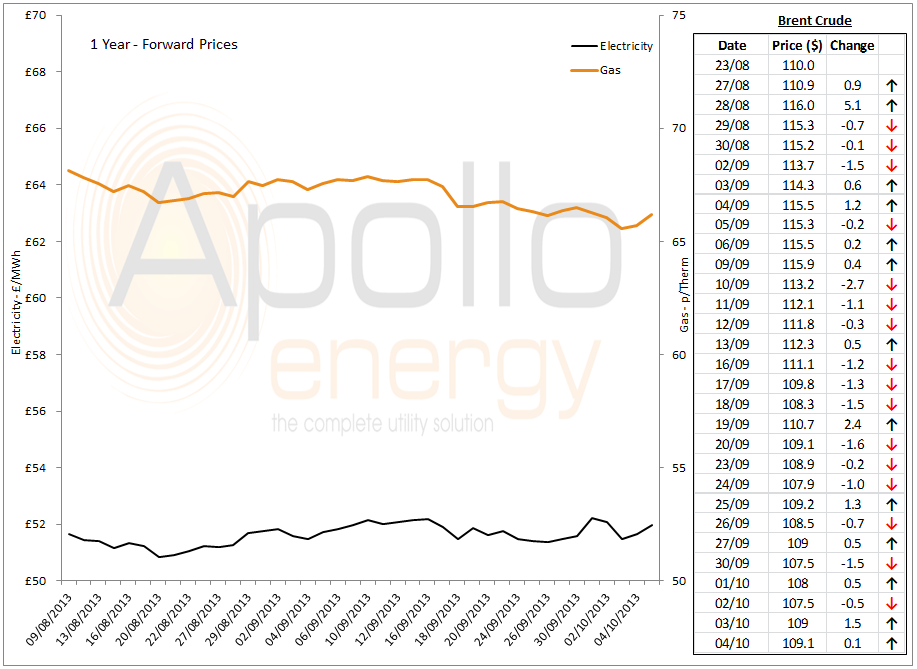 Brent was somewhat stable yesterday at around $109/b while WTI fell by $0.80/b which took the WTI/ Brent spread to -$5.7/b. The US shutdown continues to have a bullish effect on prices and the tropical storm Karen is expected to reach hurricane strength today and could hit the Gulf Coast over the weekend.