Prices have opened lower this morning but some bullish tension has come from a number of nuclear power units which have had their return dates pushed back. European temperatures remain mild for October but a weak nuclear outlook should offset this and little movement is expected this afternoon. The UK has experienced a drop in temperatures today and this has offered support to gas prices which have climbed higher due to increased heating demand. However, the UK gas system is well-supplied due to strong Norwegian output and milder temperatures are set to return; today's outlook is bearish as a result. Today's prices can also be found in an easy to read table on our 'current UK energy price' page.

Near-curve gas prices moved down yesterday afternoon as the market took direction from the mild weather forecast with little else to influence traders. Day-Ahead ended the session at a premium as a drop in temperatures was expected today, while weaker Brent weighed on the far-curve. On the power curve Day-Ahead closed lower as reduced wind generation was forecast for today. Nuclear availability remained low which pushed most contracts higher but European demand was below average and this helped to limit the gains.

The majority of gas contracts moved higher this morning with prices rising by as much as 0.55ppt. Day-Ahead was the exception to this upward movement and opened unchanged at 49.50ppt. Overall gas flows were higher than Monday's levels with South Hook and BBL both improving their output. Day-Ahead power opened with a loss of £0.85/MWh as wind generation is expected to grow tomorrow and continues to be the main driver of the prompt contract. The rest of the curve moved marginally higher with Summer-16 adding £0.30/MWh to its price.

Market close data has revealed that the 1-year forward price for commercial gas moved higher while commercial electricity recorded a small loss - closing at 58.43ppt and £51.75/MWh, respectively. This can be seen in the graph below. 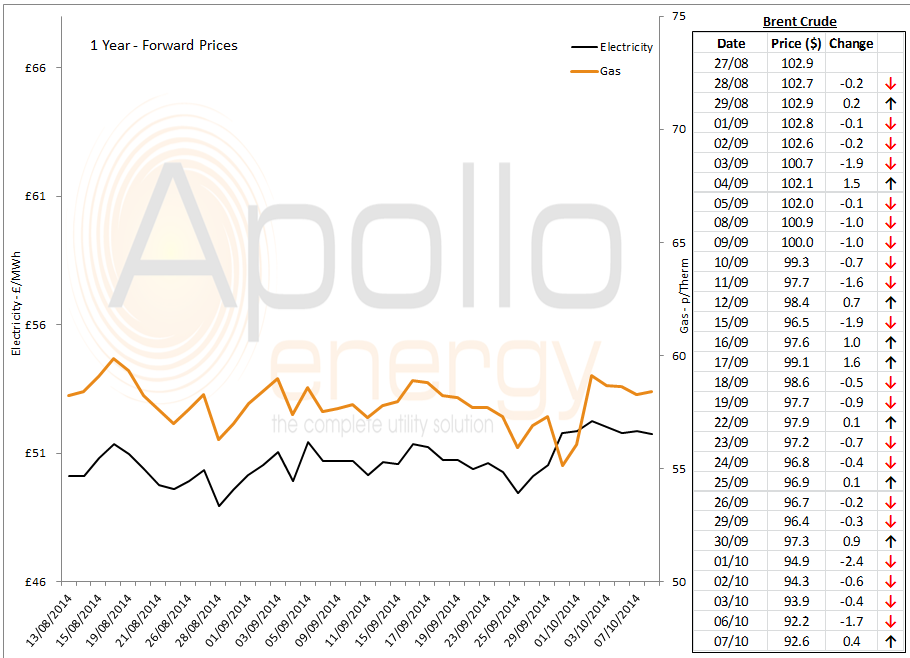 Brent 1st-nearby prices recorded a gain this morning, rising by almost $0.50/b as the US Dollar registered its largest daily decrease since January; Prices currently trade below $92.7/b.