Spot power prices are displaying a bearish trend this morning with improved nuclear availability and a stronger wind generation forecast the market drivers. The forecast for a mild October is also providing downward pressure but numerous nuclear plants are set to undergo maintenance which could push some prices higher this afternoon. Gas prices moved down on Friday due to healthy supply levels and lower demand despite the lack of news in regards to Russian gas transit through Ukraine. There has been little change to fundamentals this morning and an over-supplied system, rising Norwegian flows and weaker oil should lead to further losses. Today's prices can also be found in an easy to read table on our 'current UK energy price' page.

Movement on the gas curve varied this morning as Day-Ahead climbed 0.10ppt higher and Front-Month fell by 0.45ppt. Langeled flows have ramped up by 13mcm but output via South Hook and BBL has fallen to around 8mcm. Further along the curve Q2-15 was the morning's biggest mover with a gain of 0.85ppt. Day-Ahead power climbed £1.50/MWh higher this morning as wind generation is expected to fall tomorrow. However, this drop in production is only thought to be temporary with higher generation expected on Wednesday and Thursday. Elsewhere, seasonal contracts ignored weakening oil prices with Winter-15 climbing £0.60/MWh higher.

Market close data has revealed that the 1-year forward price for commercial gas decreased while commercial electricity recorded a small gain - closing at 58.28ppt and £51.88/MWh, respectively. This can be seen in the graph below. 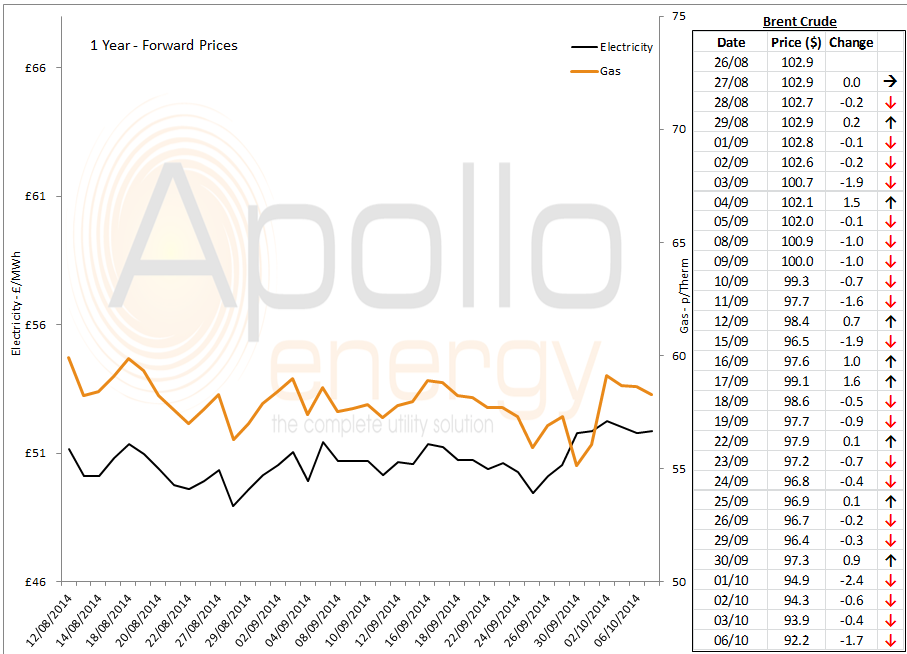 Brent 1st-nearby prices decreased further on Friday and traders expect that prices could fall to around $90/b this week. Brent currently stands at around $92/b this morning and fell by nearly 5% over the course of last week.