Spot power prices were slightly supported yesterday as temperatures for next week have been revised lower. However, this upward movement is thought to be temporary with wind generation expected to increase. Despite the downward revision for the start of next week, temperatures in January are expected to remain mild which helped to weigh on gas prices yesterday, although the losses were restricted by a slight drop in supply. Prices moved higher this morning as the market attempted to correct itself somewhat but milder weather and comfortable supply should help the bears regain control. Today's prices can also be found in an easy to read table on our 'current UK energy price' page.

Gas prices encountered a rather volatile session yesterday but the overall sentiment was bearish. The main market driver is falling Brent which hit a 5 year low in the afternoon, while healthy LNG supply helped to weigh on the near-curve with numerous deliveries expected. Elsewhere, an unplanned outage at the St Fergus pipeline saw overall gas flows drop to 12mcm temporarily. Temperatures are expected to be slightly colder next week which saw Front-Month power mirror its gas counterpart in price with February-15 adding £0.85/MWh to its price. Further along the curve, most contracts were influenced by weaker gas and fuel prices.

Numerous gains were observed across the gas curve this morning with Day-Ahead rising by 0.15ppt and April-15 adding 0.80ppt to its price. Overall gas flows were lower day-on-day with BBL output dropping to 15mcm which supported the bulls on the near-curve. Day-Ahead power shed £0.25/MWh from its price as wind generation is expected to strengthen further tomorrow and currently holds 14% of the generation mix. Movement for seasonal contracts varied with summer contracts falling by £0.45/MWh on average and winter contracts increasing by £0.45/MWh.

Market close data has revealed that the 1-year forward price for both commercial gas & commercial electricity increased - closing at 47.10ppt and £44.95/MWh, respectively. This can be seen in the graph below. 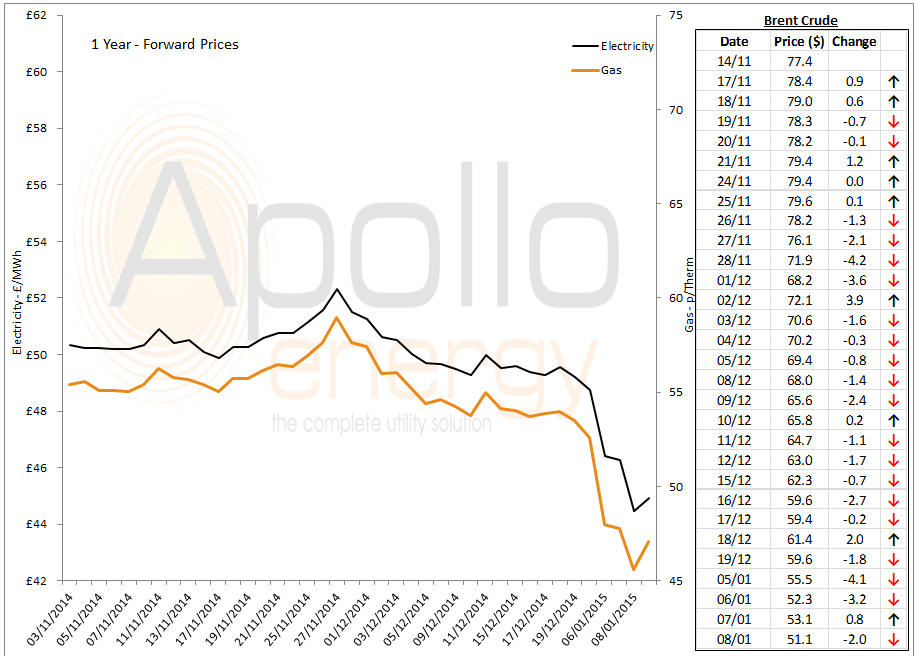 Brent 1st-nearby prices displayed a gain yesterday for the first time in four days and now trades back above $51/b. Prior to this rebound, Brent decreased by $6/b since last Friday and fell to $50/b for the first time since May 2009.