Spot power prices weakened once again during yesterday's session as wind generation levels were healthy and continue to improve. However, prices moved higher today as temperatures are set to drop across Europe which should result in more demand. Gas prices increased for the second day in a row on Thursday following a drop in supply due to numerous outages. Today UK LDZ demand is 13% lower than Thursday but the UK gas system has opened under-supplied due to a drop in Norwegian output, while lower temperatures are also offering some support. Today's prices can also be found in an easy to read table on our 'current UK energy price' page.

Movement on the gas curve fluctuated yesterday with a drop in supply countering generally bearish fundamentals. Day-Ahead gas managed to record a loss despite a short UK gas system, with BBL flows dropping by around 34mcm. Overall demand for gas was lower as strong wind generation resulted in gas-fired power plants reducing their output. Power contracts on the near-curve took direction from their gas counterparts by the end of yesterday session with February-15 falling by £0.35/MWh. Further along the curve most contracts closed at a discount; Winter-15 decreased by £0.75/MWh and Summer-16 displayed a drop of £0.65/MWh.

Day-Ahead gas opened 1.50ppt higher today as the UK gas system opened short following reduced output at a number of facilities, including BBL and Langeled. Elsewhere, most contracts moved higher on the back of a colder weather forecast but weak fuel prices offered some support to the bears. The usual drop in industrial demand over the weekend failed to have much effect on Day-Ahead power today which took direction from stronger gas. Healthy wind generation also failed to weigh on the contract; some parts of the country can expect to see wind speeds of up to 100mph over the weekend.

Market close data has revealed that the 1-year forward price for commercial gas increased, while commercial electricity made a small loss - closing at 47.18ppt and £44.88/MWh, respectively. This can be seen in the graph below. 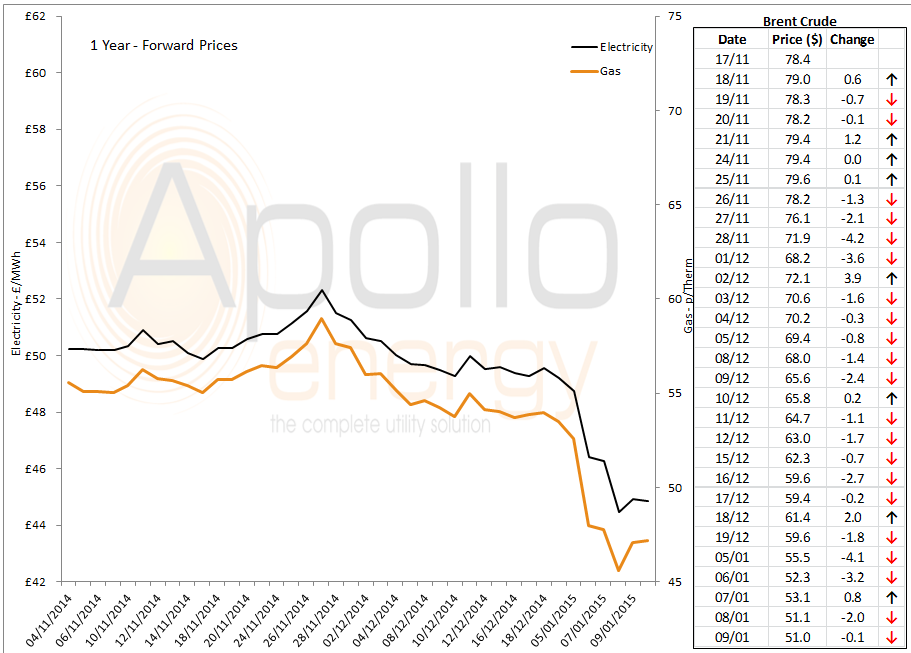 Brent 1st-nearby prices are set to record a 7th weekly loss today despite a temporary rebound in the middle of the week. Brent currently trades just above $50/b following a small loss of $0.14/b overnight.