A few nuclear power plants are offline at the moment due to maintenance but none as a result of outages. The gas system in the UK is stable at present which led to bearish NBP prices on Friday morning but August 2013 prices rose later in the day as BBL flows decreased and a number of storage withdrawals took place.

Rising Brent prices led to gas contracts making gains with Day-Ahead going up by 0.85ppt to close at 64.85ppt. Front-Month also went up, adding 0.60ppt to its price whereas smaller gains were observed further along the curve. A stronger Euro is also expected to lead to an increase in exports via the interconnector this week. The power curve took a similar direction to gas but the gains were not as significant; Winter-13 went up the most to close at £55.25/MWh and Day-Ahead rose by £0.35/MWh. EUA spot prices fell by â‚¬0.26/tn and carbon prices were also weaker but this had very little effect on power contracts.

The system opened 4mcm short which led to Day-Ahead going up by 0.35ppt with an increase in Front-Month Brent also having an influence. Near curve contracts made gains ranging between 0.05ppt and 0.25ppt while on the far-curve every contract went up except Summer-14. Flows via South Hook, Holford and St Fergus fell today while the Bacton BBL saw an increase in flows of 9mcm/day. Most near curve contracts added to their price as front contracts mirrored their gas counterparts somewhat; Day-Ahead climbed £2.00/MWh and Front-Month saw a rise of £0.40/MWh. Further along the curve there were small losses encountered by most seasonal contracts which ignored stronger Brent and APi2 coal prices.

Market close data has revealed that the 1-year forward price for both commercial gas & commercial electricity went up - closing at 68.65ppt and £52.05/MWh, respectively. This can be seen in the graph below. 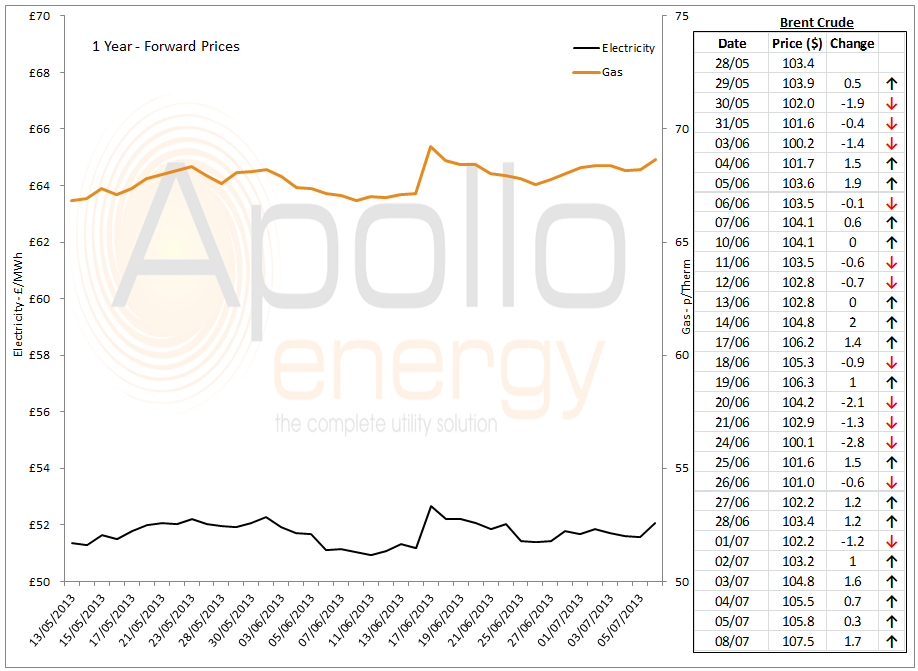 A stronger US Dollar and an increase in Bond yields saw a decline in commodity prices but oil prices continue to make gains due to tensions in North Africa. Brent 1st-nearby prices rose to $107/b on Friday and hit a high of $108/b this morning.