Spot prices are expected to stay at low levels for the next few days as a decrease in solar power will be offset by stronger wind generation. Improved supply levels in France will also help the spot prices maintain a bearish trend. The UK gas system is currently well-supplied although August 2013 prices went up slightly due to decrease in UK production levels.

The system opened short although NBP prices managed to make losses due to increased flows via the Bacton BBL pipeline which stood at around 20mcm/day. Maintenance is expected to take place at a number of storage sites this week which should lead to an increase in exports. Day-Ahead power hit a high of £49.10/MWh as gas-fired generation increased its share of the generation mix and numerous plants suffered unexpected outages. The far curve displayed a bearish outlook with Seasonal contracts closing at a discount. A number of power plants are also set to return online this week which should resolve any supply issues.

Gas prompt prices moved up today following an increase in export demand while flows via the interconnector stand at 30mcm. Higher Brent influenced Front-Month and Far-Curve contracts which made gains, while storage levels are around 60% full. Day-Ahead power made a gain of £0.70/MWh as Gas-fired generation continues to up its share of the fuel mix and is now 3% higher than Coal-fired generation. Far-Curve contracts also went up as they took direction from the gas curve.

Market close data has revealed that the 1-year forward price for both commercial gas & commercial electricity made a small loss - closing at 68.63ppt and £52.00/MWh, respectively. This can be seen in the graph below. 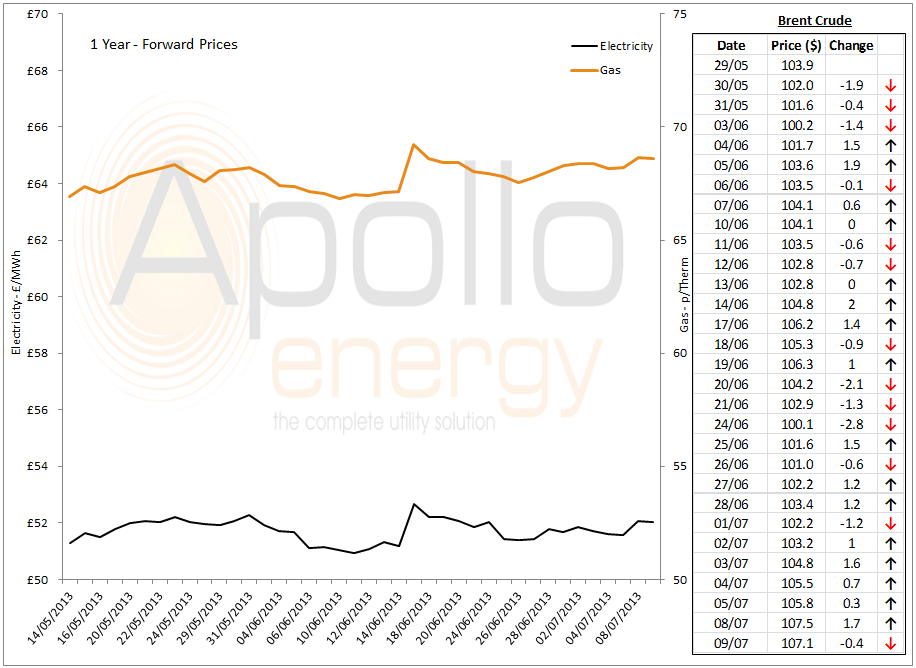 Brent 1st-nearby prices remained above $107/b today as oil prices were stable although the Suez Canal could be closed if the problems in Egypt escalate.