Fewer tensions are expected on the spot market in the next few days while supply levels should also see a small improvement on the back of improved renewable energy generation. Higher wind production in Germany and stronger hydro production in France should see prices go down. The UK gas system opened long this morning but contracts could turn bullish as maintenance is set to take place at Kollsnes and Langeled, which should begin in two days. Today's prices can also be found in an easy to read table on our 'current UK energy price' page.

Day-Ahead gas made a gain of 0.20ppt as the system was short by the end of yesterday's session. However, most contracts along the curve made losses taking influence from weaker Brent which has fallen thanks to improved output from North Sea facilities. Front-Month power fell by £0.15/MWh in contrast to Day-Ahead which climbed by £0.15/MWh and Winter-13 and 14 both lost £0.05/MWh. Weaker Front-Month Brent and lower carbon contracts are thought to be the main drivers of prices at present.

Gas flows via the Bacton BBL increased to 19mcm which saw the Day-Ahead contract drop by 0.50ppt to open the session at 66.40ppt. Front-Month contracts and Winter 13 saw no change while every other contract made a small gain due to an outage at a Norwegian gas field. The gas field should be fully operational again by tomorrow and storage levels currently stand at 76%; two LNG shipments are also due next week. The power curve saw only minor changes this morning as the majority of contracts mirrored the movement seen on the gas curve. Day-Ahead opened at a discount and fell by £1.90/MWh with higher wind production and the restart of a number of nuclear plants a factor. Further along the curve, contracts either failed to register any change or made a gain between £0.05/MWh and £0.25/MWh.

Market close data has revealed that the 1-year forward price for both commercial gas & commercial electricity decreased - closing at 68.13ppt and £51.68/MWh, respectively. This can be seen in the graph below. 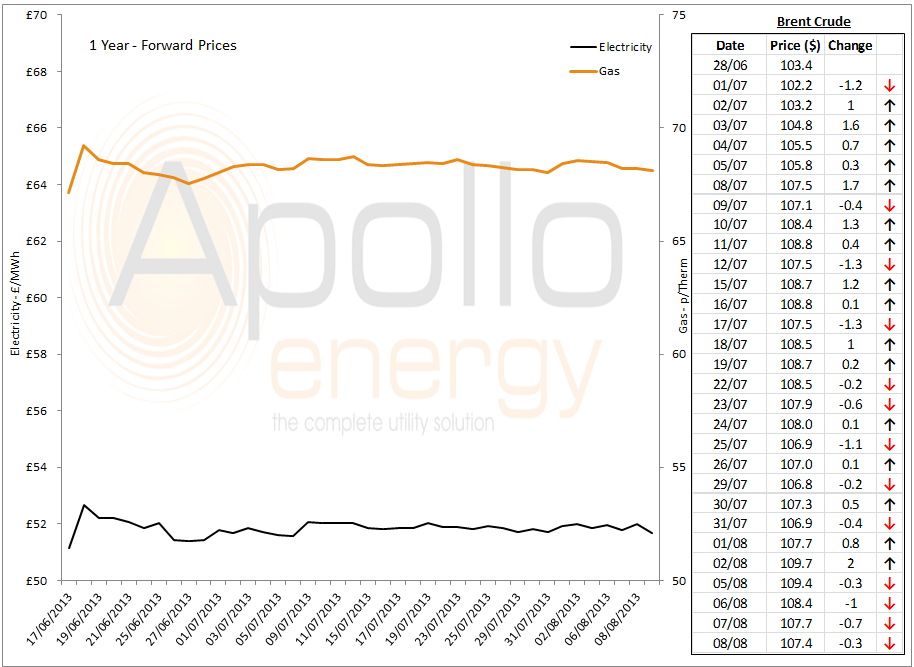 Brent prices fell yesterday while gasoline and US diesel rebounded slightly as a result of the EPA announcement regarding biofuel mandates. Meanwhile, numerous threats to supply and the delayed restart of the Buzzard facility led to the strengthening of Brent September/ October-13 timespreads.