Spot prices fell yesterday with the usual drop in energy demand on Friday an influencing factor. Hydro production is forecast to improve but wind generation should decline slightly which should see prices remain firm. The UK gas system has opened long today and supplies are adequate but any losses on the gas curve will be restricted by on-going maintenance at numerous sites. Today's prices can also be found in an easy to read table on our 'current UK energy price' page.

Losses were seen across the gas curve yesterday as contracts were influenced by a long system and improved flows from numerous terminals. Day-Ahead fell by 0.45ppt while seasonal contracts took direction from falling Brent. Storage levels currently stand at 76% which helped far-curve contracts close lower; Winter-15 registering the largest price drop of 0.75ppt. Day-Ahead power climbed £0.85/Mwh and ignored the improvement in wind generation while the rest of the curve followed its gas counterpart, closing unchanged or slightly lower.

The gas system opened 12mcm long despite a slight drop in BBL imports and the Within-day contract was trading 1ppt lower than Day-Ahead. The rest of the curve was bearish on the back of weaker Brent prices except September-13 which added 0.90ppt. Higher carbon prices saw seasonal contracts open higher as December-13 EUA registered its highest closing price since the start of July. Day-Ahead shed £0.70/MWh from its price despite the temporary shutdown of numerous units at the Tilbury facility.   Wind generation is expected to fall slightly and peak levels should be around 1.3GW over the weekend.

Market close data has revealed that the 1-year forward price for both commercial gas & commercial electricity decreased - closing at 67.83ppt and £51.45/MWh, respectively. This can be seen in the graph below. 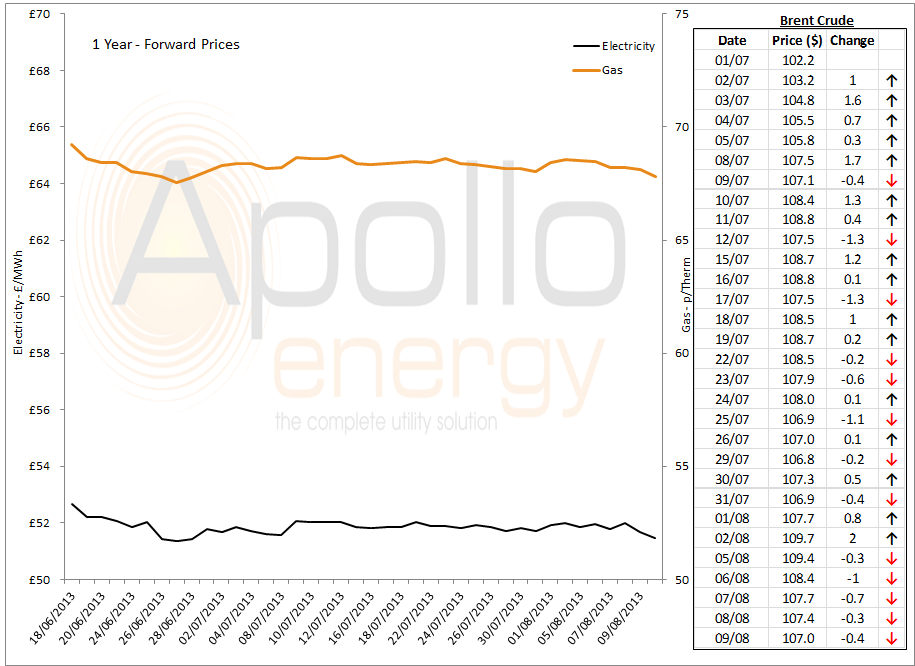 Brent prices decreased yesterday and ignored Libyan supply threats, strong Chinese trade data and a rise in Chine crude imports. Prices hit a low of $105.85/ bbl but made up 76 c$/b before the close of the session; The Brent/ WTI spread widened once again and reached a one week high of -$3.85.