Spot power prices has followed the movement of gas this morning and have decreased. Meanwhile, renewable generation isn't expected to change much over the coming days and in terms of nuclear generation, the Tihange-1 in Belgium is expected to return on Thursday.

Gas prices increased yesterday as Norwegian imports into the UK fell as a large percentage were rerouted back to Europe following the re-opening of a terminal in Germany. Gas contracts have weakened this morning as demand levels are 10mcm lower than yesterday and the Pound has strengthened against the Euro.

Significant upward movement was displayed across the gas curve yesterday as the system was under-supplied throughout the session due to increased demand and a drop in Norwegian supply. The arrival of an LNG delivery did little to restrict the upward movement and a warmer weather outlook also failed to weigh on the prompt.

Power prices were dictated by stronger gas yesterday, with a drop in wind generation forecast for today, providing further support to the prompt. Demand levels were above average due to colder weather which resulted in a bullish session for energy contracts.

Gas contracts have posted losses this morning with the prompt correcting downwards to erase yesterday's strong gains. The system was 31.6mcm short yesterday but is better supplied today, currently just 8mcm short due to lower demand levels. An LNG tanker arrived in the UK yesterday, with another expected on Thursday, providing additional bearish pressure.

Power contracts have decreased on the back of comfortable generation and weaker fuel prices. Healthy wind production and reduced consumption have helped the day-ahead contract to shed from its price, while falling Brent has pressured down some contracts on the far-curve.

Market close data has revealed that the 1-year forward price for both commercial gas & commercial electricity decreased - closing at 41.99ppt and £42.58/MWh, respectively. This can be seen in the graph below. 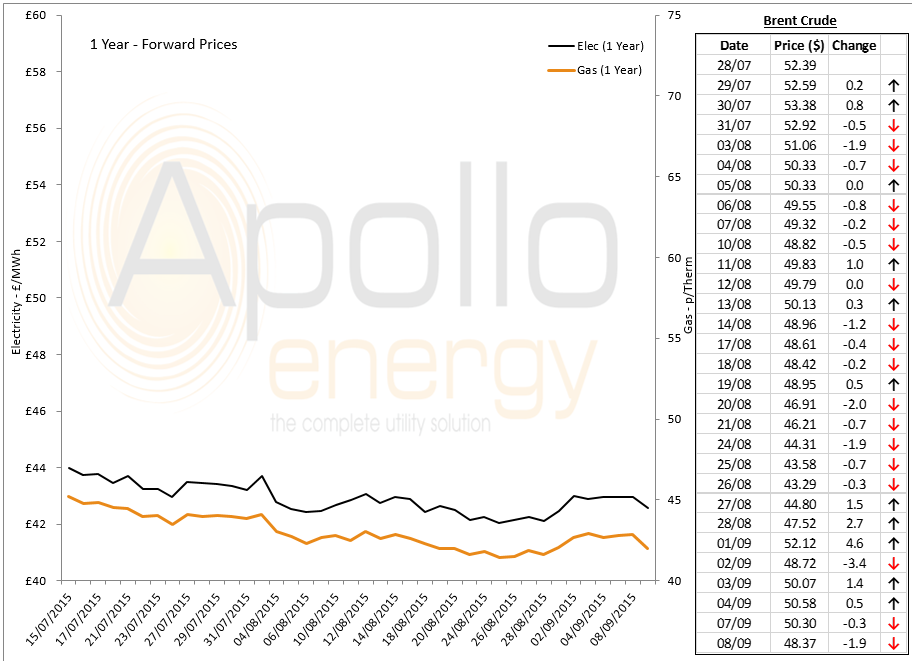 Brent 1st-nearby prices have posted sizeable losses with no clear bullish factor able to offset the effects of global supply and potentially weak demand; Brent traded just below $48.4/b this morning.