Spot power prices are generally stable this morning with some contracts showing no movement from Friday. Healthy renewable generation and a rise in nuclear availability helped to weigh on prices over the weekend although these levels are expected to decrease this week.

A number of outages in Norway reduced imports into the UK and pushed gas prices higher on Friday. Norwegian imports remain low this morning following the re-opening of the Emden terminal in Germany as gas flows have been rerouted to Europe, leaving the UK gas system nearly 40mcm short and supporting prices.

Day-Ahead gas climbed higher on Friday as Norwegian flows were reduced due to maintenance and demand levels increased due to colder weather. The UK gas system was 31.6mcm short on the back of this weak supply/ demand picture, with losses evident across the near-curve.

Power prices were supported by stronger gas on Friday with further upward pressure coming from a higher demand forecast which helped the prompt and front-month record significant gains. Further along the curve, the price increases were more subdued thanks to weaker oil prices.

Gas prices continue to inch higher this morning as Norwegian imports have plummeted due to the re-opening of a terminal in Germany. Norwegian flows into the UK were high last week as imports which were designated for Europe were rerouted. Strong demand levels on the back of below average temperatures are also a factor.

Gas prices have shown very little movement this morning as generation levels are comfortable and have offset an increase in demand. However, Day-Ahead is the exception and has added £0.95/MWh to its price due to an expected drop in wind production tomorrow.

Market close data has revealed that the 1-year forward price commercial gas increased slightly, while commercial electricity was unchanged - closing at 42.85ppt and £42.95/MWh, respectively. This can be seen in the graph below. 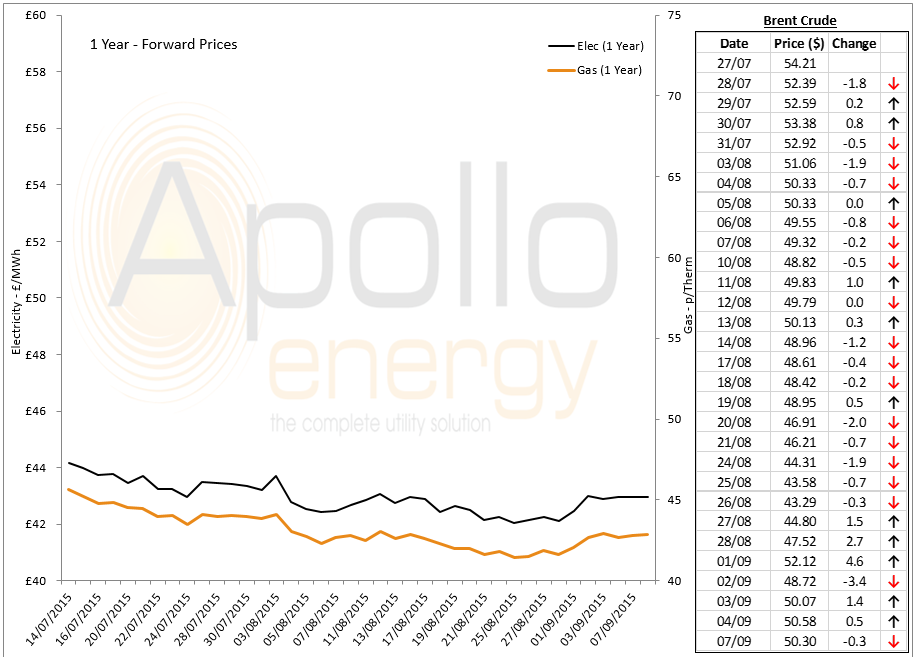 Brent 1st-nearby prices moved down over the weekend due to a strengthening US Dollar and concerns regarding the economic situation in China.