Spot power prices inched higher yesterday as a drop in European wind generation reduced supply levels. Today's outlook is rather stable as above average temperatures have lowered demand, with wind production expected to increase at the weekend. Gas prices decreased yesterday as warmer weather helped towards a long UK gas system despite an outage in Norway. A further drop in Norwegian supply is expected in the coming weeks due to maintenance, while Dutch production has also encountered a significant drop due to restrictions at the Groningen gas field; this afternoon's outlook is a bullish one. Today's prices can also be found in an easy to read table on our 'current UK energy price' page.

Gas prices moved higher yesterday morning but corrected downwards as the session progressed. Bearish movement was evident despite reduced imports from Norway as mild temperatures and weaker oil were the main market drivers. Power prices displayed a similar trend to gas, initially opening higher but posting losses in the afternoon. Wind generation is expected to ramp up over the weekend, while low demand, as a result of warmer weather weighed on the prompt.

Most gas contracts have opened at a premium this morning due to a weaker supply picture. Numerous facilities in Norway are set to go offline due to maintenance in the next few weeks, while the main gas facility in Holland is also operating at reduced capacity. Near-curve power prices have decreased this morning, while contracts beyond Winter-16 have opened unchanged. Above average weather remains the main influencing factor as consumption levels have dropped significantly from last week.

Market close data has revealed that the 1-year forward price for both commercial gas & commercial electricity decreased - closing at 48.13ppt and £44.98/MWh, respectively. This can be seen in the graph below. 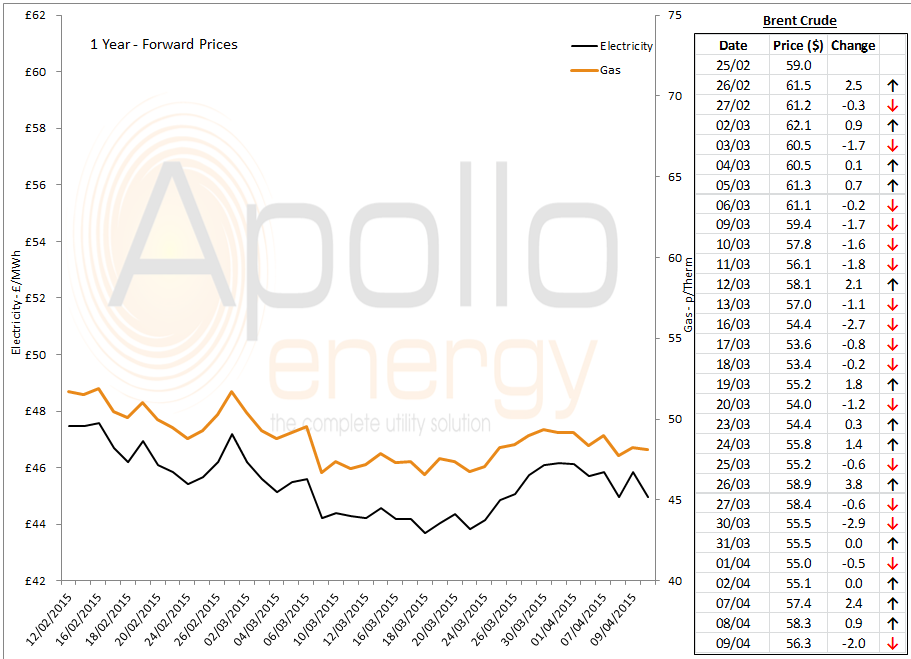 Brent 1st-nearby prices have fallen by $2/b this morning as the US inventory report has shown a large increase in stocks and production levels have also improved; Brent currently trades at $56.29/b.