Spot power prices moved higher yesterday as wind generation levels fell across Europe and another drop is expected today, falling from 7GW to below 5GW. An outage at a coal-fired facility also offered support, although nuclear availability is set to increase today following the return of two units; mixed movement is expected. Above average demand levels for this time of year helped to push gas prices higher yesterday, with a weaker British Pound also providing assistance to the bulls. Despite opening higher this morning, a halt in UK exports to Belgium tomorrow and a weaker demand outlook should see prices fall this afternoon. Today's prices can also be found in an easy to read table on our 'current UK energy price' page.

Upward movement was displayed across the gas curve yesterday due to a short UK gas system on the back of weaker supply levels. Norwegian flows were reduced as a result of maintenance at the Kollsnes processing facility and two other sites. Further bullish pressure came from a stronger Euro and above average demand levels. Power prices ticked higher due to below average temperatures which caused a rise in demand. Front-Month followed its gas counterpart and was also dictated by a weaker British Pound, while Front-Quarter and Winter-15 both climbed £0.54/MWh higher. Elsewhere, the gains were less prominent on the far-curve, helped by the return of the Hunterston B power station.

Gas prices have opened higher this morning as maintenance continues at Norwegian facilities and storage levels are weak. However, maintenance at the Belgian interconnector will halt exports from the UK, helping stocks to recover. A warmer weather outlook has helped Day-Ahead power to shed £0.80/MWh from its price this morning with demand levels expected to fall considerably. The majority of prices have followed gas, although some losses were observed on the far-curve. Meanwhile, nuclear availability is much improved from last week, although wind generation is low.

Market close data has revealed that the 1-year forward price for both commercial gas & commercial electricity increased - closing at 46.88ppt and £45.05/MWh, respectively. This can be seen in the graph below. 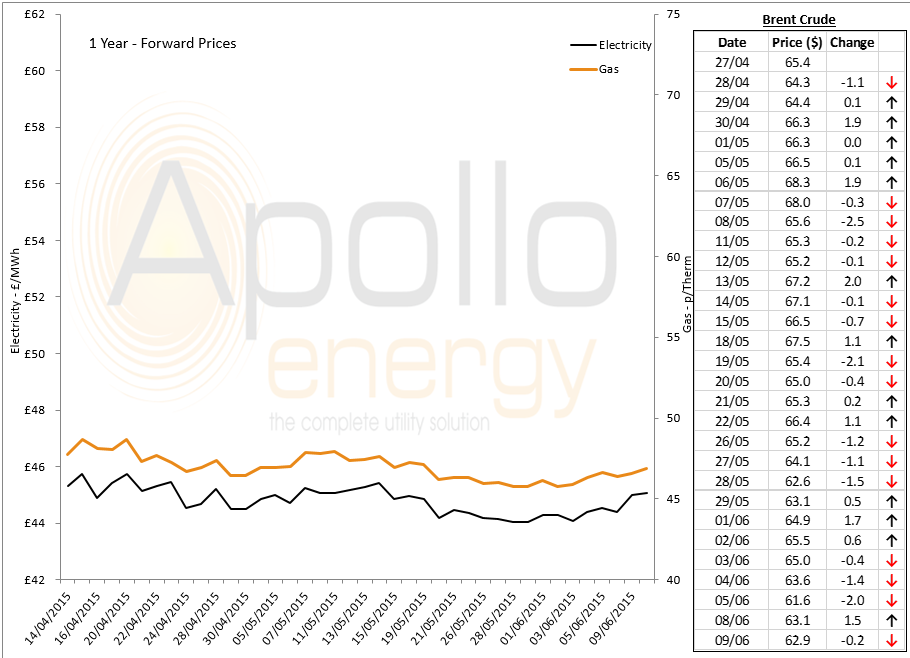 Brent 1st-nearby prices decreased overnight and have fallen back below $63/b with news of OPEC's decision not to cut production likely to spark a downward trend.