Spot power prices have moved higher this morning following a decrease in generation capacity as wind generation has fallen across Europe and nuclear availability is also reduced. However, temperatures are set to sustain current levels until the weekend at least and this has helped to restrict some upward movement. Gas prices were supported on Friday by a drop in Norwegian output and an increase in exports to Belgium from the UK. Gas demand in the UK is slightly above average this morning and no LNG deliveries have been scheduled as of yet; prices have increased as a result. Today's prices can also be found in an easy to read table on our 'current UK energy price' page.

Stronger gas-fired power generation increased demand levels on Friday which pushed near-curve prices higher, with the prompt and front-month contracts displaying gains. Flows via South Hook also dropped by 10mcm although scheduled maintenance at the Belgian interconnector will result in a 14-day halt in exports from the UK; helping to replenish storage levels. Power contracts climbed higher on Friday, tracking the movement of gas and cancelling out Thursday's losses. Wind generation fell by 1.62GW but this had little effect on the prompt contract as solar generation increased to offset the difference.

Gas prices have climbed higher this morning due to an increase in demand and a weaker supply picture. Stronger Brent has offered some support to far-curve contracts although an expected drop in exports to Belgium has provided some downward pressure. Day-Ahead power has increased as a result of a drop in wind generation this morning, while contracts further along the curve followed their gas counterparts. Demand levels are also slightly above the seasonal average and this has provided further support to the bulls.

Market close data has revealed that the 1-year forward price for both commercial gas & commercial electricity increased - closing at 46.55ppt and £45.00/MWh, respectively. This can be seen in the graph below. 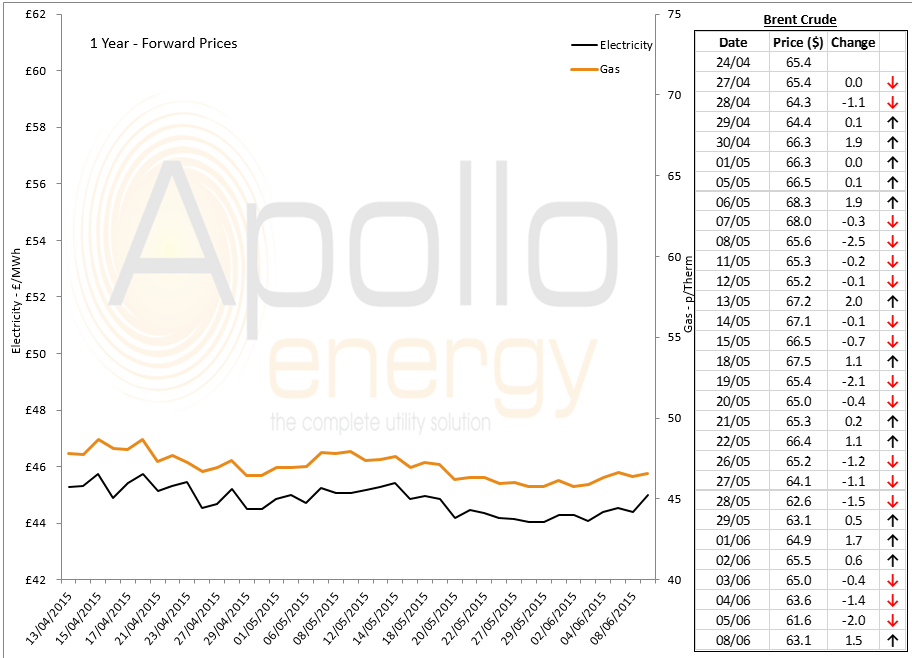 Brent 1st-nearby prices have climbed higher this morning and currently trade above $63/b on the back of positive employment figures coming out of the US. On Friday, OPEC announced that it would not reduce its output and will continue its quota of 30Mbd; adding to worries of global oversupply.