Temperatures are expected to fall in the next couple of days which should lead to a sharp increase in demand. The colder temperatures are expected to last until late next week at least which should add support to spot prices. The UK gas system was at healthy levels yesterday and resulted in a significant rise in storage injections; gas prices moved down as a result. Although the forecast of colder weather should lead to an increase in demand which could help near-curve prices make gains. Today's prices can also be found in an easy to read table on our 'current UK energy price' page.

Day-Ahead gas registered a 0.65ppt loss while front-month and front-quarter contracts moved higher and took influence from stronger Brent. The UK gas system remained long throughout the day and closed the session at 8mcm long, Langeled fell to 30mcm following send-outs of over 50mcm on Monday. The power curve displayed a bearish trend with Day-Ahead shedding £0.50/MWh from its price on the back of a higher wind generation forecast of over 5GWh for today. Interconnector flows were switched to export mode in the morning but reverted back to import mode in the afternoon. Front-month contracts fell by around £0.20/MWh with weaker Front-Month Api2 coal the main driver of prices.

Gas contracts went up this morning with Day-Ahead adding almost 2ppt to its price, most likely down to a decrease in Bacton BBL flows and colder temperatures. Front-Month and seasonal contracts also moved higher due to stronger prompt and Brent prices. Day-Ahead power followed its gas counterpart closely and added £1.60/MWh as a result of lower wind production and cooler weather. Front-Months strengthened further in order to build up their winter risk premiums while weaker coal prices restricted contracts further along the curve.

Market close data has revealed that the 1-year forward price for commercial gas climbed higher while commercial electricity showed no change - closing at 66.63ppt and £52.25/MWh, respectively. This can be seen in the graph below. 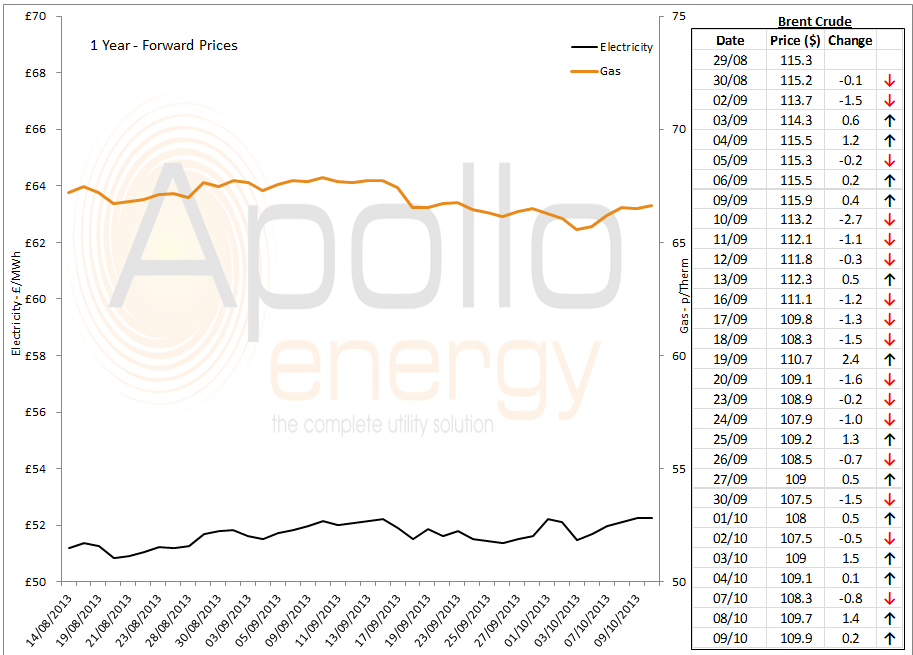 Crude oil prices increased further yesterday although it appears that US negotiations are making progress in regards to ending the government shutdown.