Spot power prices made gains due to weaker supply levels, a drop in renewable energy production and outages at thermal, nuclear and coal facilities. Norwegian supply levels improved but gas prices were driven by the colder weather which led to higher demand. Local Distribution Zones demand in the UK is expected to be around 25mcm higher but a further improvement in Norwegian and LNG flows should limit any additional gains. Today's prices can also be found in an easy to read table on our 'current UK energy price' page.

Day-Ahead gas climbed 1.25ppt higher yesterday and closed at 68.85ppt due to the cold weather which has been forecast for the UK. Front-Month failed to take any sort of direction and Langeled flows are at a healthy 67mcm/day. Far-curve prices moved down slightly following the losses made by Brent thanks to an increase in US stockpiles. Power prices followed their gas counterparts with Day-Ahead rising by £2.40/MWh to close at £52/MWh, its highest price since the middle of September. Cold temperatures continue to act as the main driver of prices as additional heating measures have resulted in higher demand. Far-curve prices also followed gas, although a softer wider fuels complex helped Winter-13 make a £0.10/MWh loss.

Day-Ahead gas fell by around 3ppt today as the usual fall in demand on Fridays pushed prices down; on top of that slightly better weather is expected for tomorrow. Gas flows in general experienced an increase which helped the gas system cope with demand levels of 190mcm. LNG flows were twice as strong this morning, South Hook saw flows of 26mcm and Langeled flows are around 65mcm. Further along the curve contracts also made losses with December-13 displaying the largest price drop of 0.30ppt. Day-Ahead power moved down and took influence from gas contracts, wind production also rose to around 40GW and now makes up 11% of the generation mix. The rest of the curve saw varied movement as the majority of front-month contracts saw no change. A nuclear unit at the Hartlepool facility resumed production yesterday after going offline in mid-September, although it will run at a reduced capacity for the next few days.

Market close data has revealed that the 1-year forward price for both commercial gas & commercial electricity showed no change - closing at 66.63ppt and £52.25/MWh, respectively. This can be seen in the graph below. 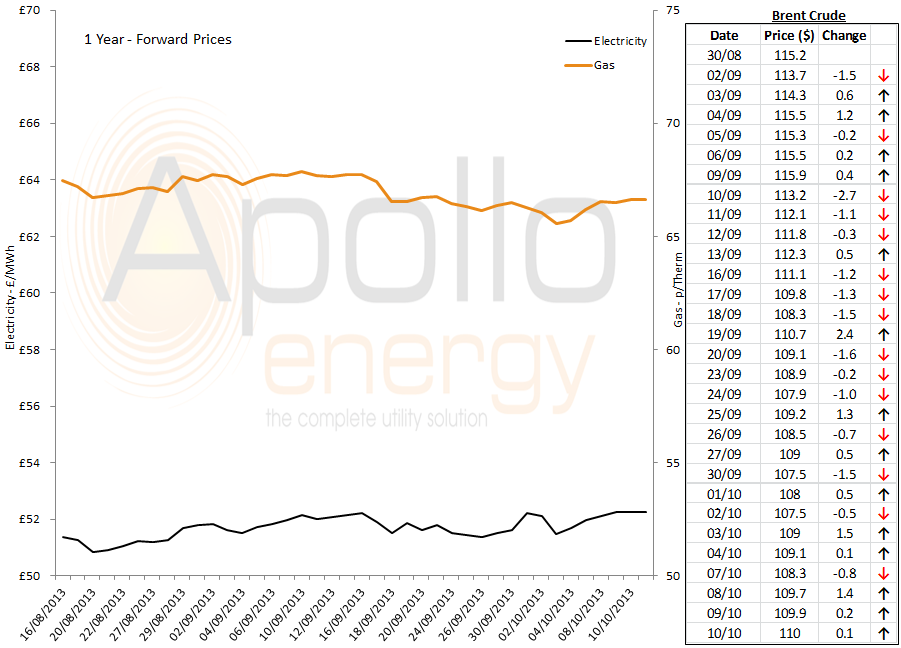 Brent 1st-nearby prices looked rather stable yesterday morning but fell by $2/b later in the day to $108.2/b, before rebounding to $109.8/b at the start of today's session. The gain was a result of a bearish EIA report and increased uncertainty regarding the US shutdown.