Spot power prices moved down yesterday due to the forecast of a mild winter, which should lead to lower than average demand levels. Prices were pushed higher this morning by rising gas prices but fundamentals are generally bearish and losses could be observed this afternoon. Gas prices moved higher as demand increased on the back of a short UK gas system; total gas demand rose to 204mcm. Norwegian gas flows have dropped this morning and temperatures in the UK are expected to remain low over the next few days which should lead to further gains. Today's prices can also be found in an easy to read table on our 'current UK energy price' page.

Gas prices moved higher by Wednesday's close due to a short UK gas system which pushed demand to higher than average levels. Day-Ahead closed at £49.35/MWh as the demand/ supply picture was not expected to improve today. Further along the curve most contracts moved higher and took influence from stronger carbon and coal. Most power price ended yesterday's session higher with the majority of contracts taking direction from gas and slightly colder weather. However, Day-Ahead managed to decrease on the back of healthy wind generation and closed at £41.70/MWh.

The UK gas system opened short this morning which led to prices drops for Day-Ahead and some near-curve contracts. Norwegian gas flows fell by around 50% and output via Langeled was just 34mcm. Most far-curve contracts climbed slightly higher as colder weather is expected for the next few days, while Brent also strengthened. Power prices increased for a successive day this morning and tracked their gas counterparts closely. Renewable generation has decreased across Europe, while a number of nuclear power plants have suffered outages. Wind generation is currently around 3.2GW today but this is expected to fall to 2.3GW tomorrow, resulting in a £1.75/MWh gain for Day-Ahead.

Market close data has revealed that the 1-year forward price for both commercial gas & commercial electricity increased - closing at 58.53ppt and £52.43/MWh, respectively. This can be seen in the graph below. 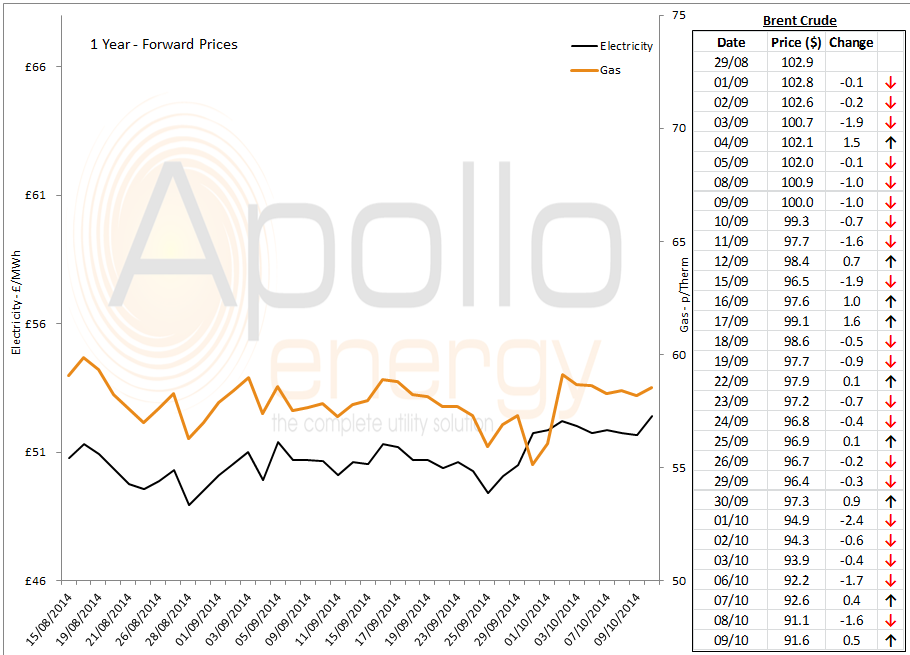 Brent 1st-nearby prices displayed a small rebound yesterday following a bearish EIA stocks report; WTI also increased. Despite this upward movement, traders still expected Brent to fall to around $90/b before the end of the week.