Gas prices had made gains by Thursday's close, with Day-Ahead adding 1.65ppt to its price on the back of reduced Norwegian flows. Front-month contracts also saw gains though to a lesser extent and further out on the curve the majority of contracts shed value.

Day-Ahead power closed at a £2.60/MWh premium yesterday as wind generation fell by approximately 1GW day-on-day. Front-month contracts mirrored their gas counterparts at market close, whilst further out on the curve prices were weighed down by a stronger pound reducing European demand for UK power. Weak gas prices also contributed to the losses.

The UK gas curve opened relatively flat this morning, though there was a significant increase in Langeled flows from 35mcm yesterday to 48mcm this morning. Despite this Day-Ahead added 1.45ppt to its price this morning. Further reductions in oil prices this morning could offer some bearish pressure to the far curve today.

The power curve also remained relatively unchanged this morning with contracts making minimal gains as a result of stronger Api2 coal swaps. A forecasted increase in wind generation may provide some bearish pressure on the curve as levels are expected to reach 6GW next week.

Market close data has revealed that the 1-year forward price for both commercial gas & commercial electricity decreased - closing at 57.90ppt and £51.58/MWh, respectively. This can be seen in the graph below. 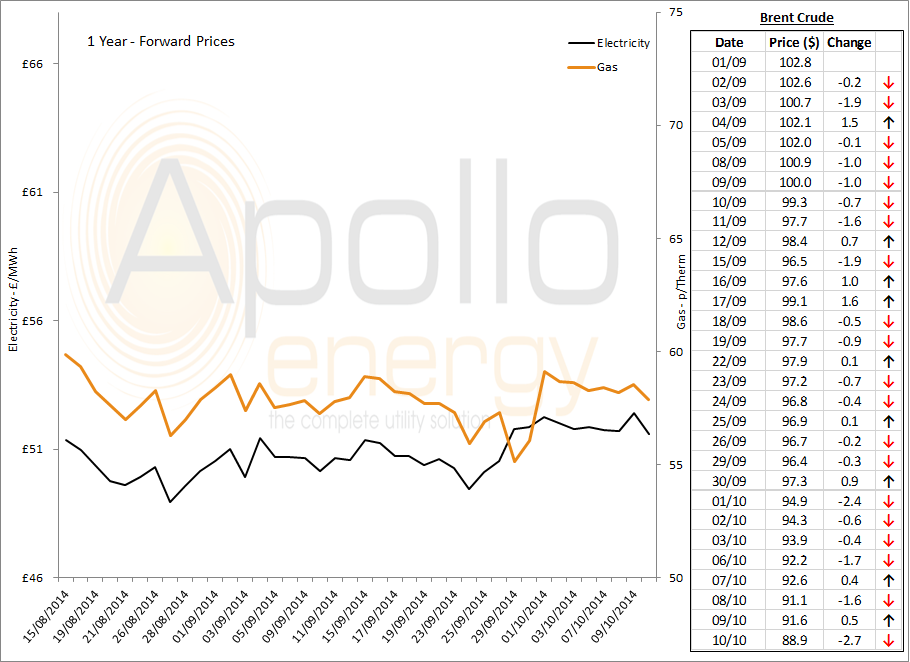 Brent-1st prices plummeted yesterday to below its 2 year support, following a fall in equities and the continued bearish pressure on the crude markets. Prices are expected to rebound slightly today though downward risks are expected for October.