Spot power prices initially opened lower yesterday despite outages at nuclear plants and an expected drop in wind generation. However, news from the Netherlands regarding significant gas production cuts led to a surge in prices. Power prices are expected to stabilise this afternoon but any downward movement is unlikely. Gas prices also moved down yesterday morning with influence coming from a milder weather forecast, but this downward movement was temporary as news of a 16% cut in production at the Groningen gas field in Holland drove prices higher. The gas market opened with further gains this morning with Dutch production cuts continuing to support the bulls; further increases can be expected. Today's prices can also be found in an easy to read table on our 'current UK energy price' page.

The gas curve moved higher yesterday with influence coming from the announcements made by the Dutch government regarding cuts at a major gas field. The Groningen gas field is scheduled to have its production limited to 16.5bn cubic meters until July. Power contracts also climbed higher and were supported by strengthening gas, while the prompt contract increased on the back of a weaker wind generation forecast.

Gas prices have continued on an upward trend with news from the Dutch government continuing to offer support. A warmer weather forecast failed to have any influence on prices with further bullish support provided by rising Brent. Power prices displayed a downward trend at the start of today's session on the back of milder temperatures which are expected to last until the end of February. However, the effects of gas production cuts in Holland regained control of the market and further increases were observed.

Market close data has revealed that the 1-year forward price for both commercial gas & commercial electricity recorded a significant increase - closing at 51.25ppt and £47.18/MWh, respectively. This can be seen in the graph below. 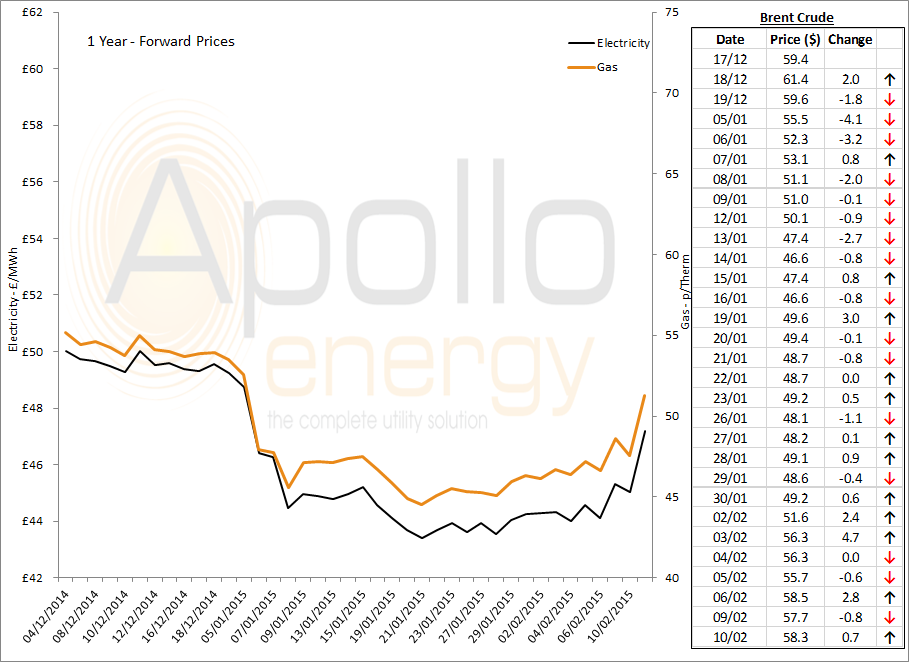 Brent 1st-nearby prices fluctuated yesterday with support coming from the latest OPEC report at the start of the session and then downward movement being applied by the afternoon's IEA report; prices finally ended the session $0.5/b higher to trade at $58.3/b.