Spot power prices increased yesterday with an expected drop in wind generation today supporting the prompt and Dutch gas production cuts pushing other contracts higher. The general outlook remains bullish with stronger gas the main market driver. Gas prices continued to rise yesterday as gas production at the Groningen field in Holland was set to be cut further. Additional bullish pressure has been provided by the on-going situation in Ukraine with little hope of the situation being resolved at present, despite lengthy negotiations in Minsk; more gains are likely. Today's prices can also be found in an easy to read table on our 'current UK energy price' page.

Movement on the gas curve was extremely volatile yesterday following the announcements made by the Dutch government regarding significant cuts at a major gas field. Meanwhile, flows via LNG terminals were strong yesterday but the healthier demand/ supply picture had little impact on prices. The power curve mirrored gas although the gains were less substantial with the bulls slightly restricted by a weaker demand forecast. Wind generation was set to remain low on Wednesday and this provided support to the prompt.

Gas prices remained bullish this morning with traders continuing to use Dutch production cuts as the main market driver. Despite rising prices, overall fundamentals are healthy with milder weather reducing demand and with a number of LNG deliveries scheduled to arrive. Power contracts also maintained yesterday's upward movement and took direction from their gas counterparts. However, a healthier wind generation forecast for tomorrow and weaker demand helped Day-Ahead to move down.

Market close data has revealed that the 1-year forward price for both commercial gas & commercial electricity recorded an increase - closing at 51.70ppt and £47.50/MWh, respectively. This can be seen in the graph below. 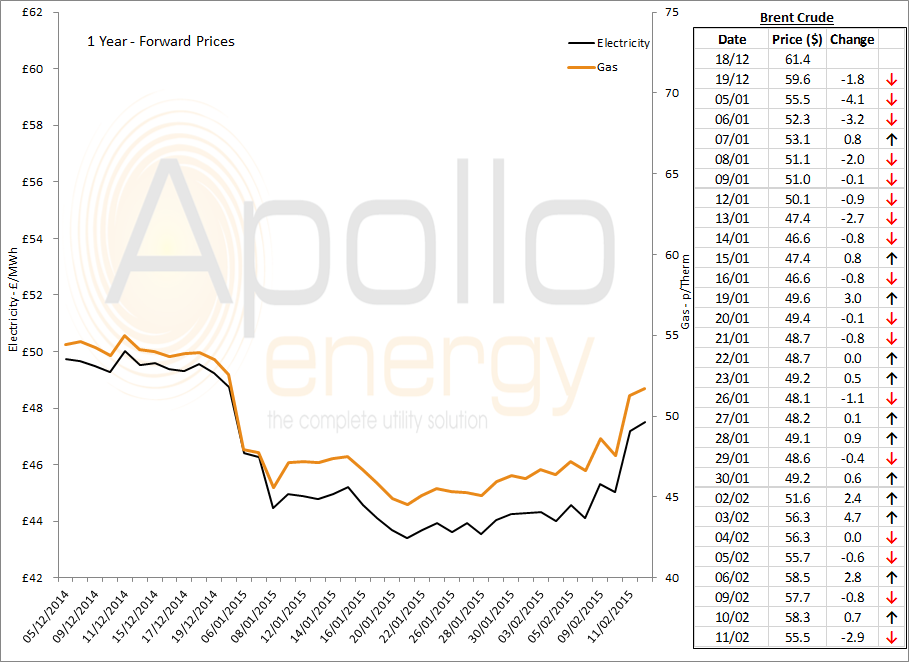 Brent 1st-nearby prices fell by over $3/b yesterday and currently trade below $56/b despite strong gains last week. It is unclear which direction prices will take in the current weeks although it is worth noting that the delivery contract for March will expire tomorrow.