NBP spot prices were supported yesterday by the gains seen across the oil market. Brent prices are expected to offer continued support today. Expectations of a deal being reached over the Greek crisis could help weigh on the curve today, though the euro is likely to remain volatile over the new few days.

The UK power curve mirrored the movements of its gas counterpart yesterday. Support continued to be received from the weakening of the pound against the euro as this increased the cost of gas and power imports from the continent. Day Ahead shed some value yesterday due to a reduction in forecasted demand.

Gas prices rose again this morning, though the outlook for the remainder of the day is expected to be neutral to bearish as higher UK temperatures are thought to restrict demand levels. The UK system is still balanced today despite reduced demand, as UKCS production is restricted due to a pause in flows at the Easington Dimlington terminal.

The power curve opened at a premium  this morning, with Day-Ahead recording the only losses. Near curve contracts received support from upward temperature revisions, with Front-Month contracts adding £0.20/MWh to its price.

Market close data has revealed that the 1-year forward price for both commercial gas and commercial electricity has increased slightly - closing at 45.50ppt and £44.00/MWh, respectively. This can be seen in the graph below. 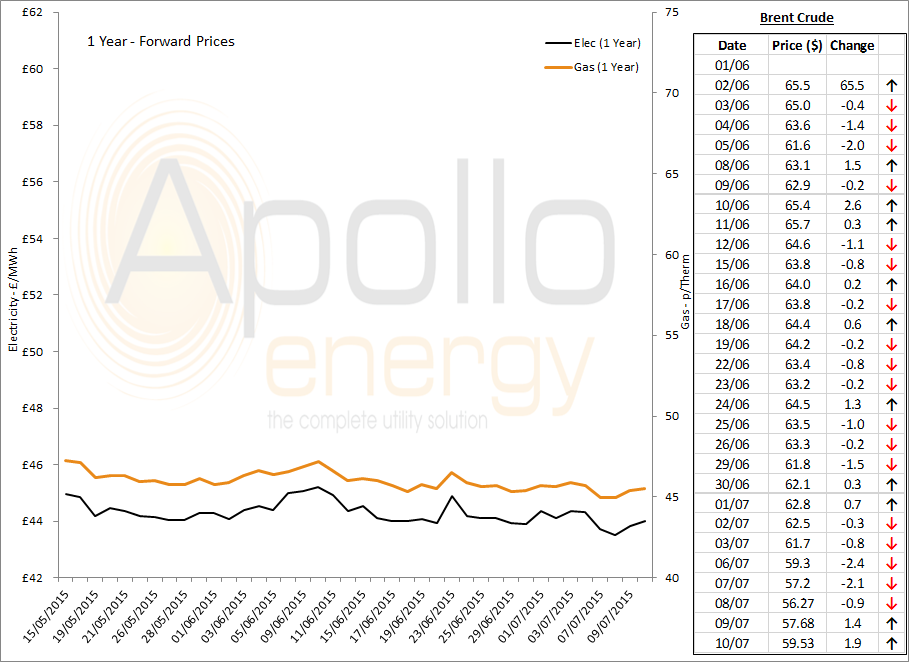 Brent crude continued to gain value yesterday, taking it to $59.5/b, following a 5% increase in Chinese stocks. Uncertainty over the Greek crisis and the extension of Iranian talks is expected to limit significant gains to Brent crude prices today.