Spot power prices made gains across the curve this morning, with only Day-Ahead recording a loss. Yesterday's MSR carbon reform received strong support in the EU Parliament though there was little change in price levels.

The UK gas curve made gains yesterday due to increased demand and reduced supply - the Norwegian Troll Facility remains under maintenance until 23rd August, with restrictions of 51mcm/day to be expected. UK demand was 26mcm above the seasonal average yesterday, pushed up by an increase in exports and storage injections.

The UK power curve also rose yesterday on the back of strengthened natural gas prices. Day-Ahead closed at a one month high receiving further support from a forecasted reduction in wind generation. Increases were also seen further out on the curve as seasonal contracts gained support from the weakening of the pound against the euro.

Gas prices made gains across the curve this morning, rebounding from yesterday's losses. Higher UK temperature forecasts combined with ample LNG supplies in the short term could place some bearish pressure on the curve today, however support could be gained as the UK system remains tight.

The power curve recorded widespread gains across the curve, apart from Day-Ahead which shed £0.60/MWh from its price this morning. Fundamentals remain steady with the outlook neutral for today.

Market close data has revealed that the 1-year forward price for both commercial gas and commercial electricity has increased slightly - closing at 45.37ppt and £43.83/MWh, respectively. This can be seen in the graph below. 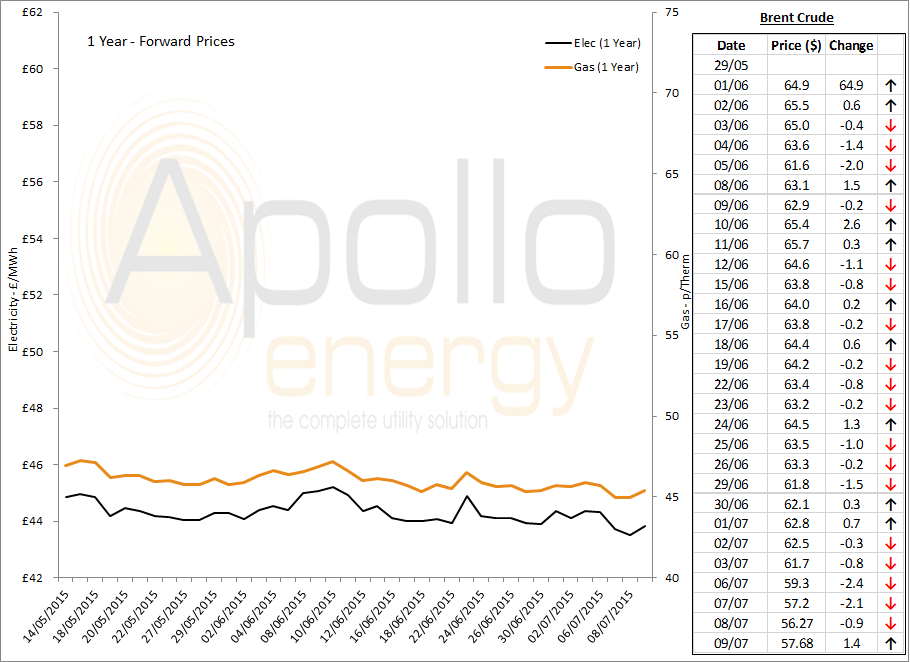 Brent crude rebounded to above $57.8/b yesterday though this is still $5-6/b lower than last week. Markets are expected to remain tentative today ahead of Friday's deadline for both the Greek and Iranian discussions. The Chinese stock market saw some gains last night following government measures, though 50% of their market remains locked out.