Gas prices moved down on Wednesday as fundamentals were healthy following a 5mcm drop in UK demand levels and flows via the BBL pipeline back to normal. The UK gas system is undersupplied this morning due to several outages but a weaker demand forecast has provided some downward pressure and prices have displayed mixed movement.

Near-curve gas prices decreased yesterday as flows into the UK improved, with Dutch imports via the BBL pipeline rising to almost 16mcm. A Dutch storage facility also suffered an outage which resulted in further flows being sent to the UK. Above average temperatures are expected over the next few days which will reduce demand levels, while weaker Brent pressured down some contracts on the far-curve.

Power contracts initially opened higher yesterday but falling Brent and coal helped contracts shed form their price later in the session. Meanwhile, the return of the Dungeness nuclear power plant has been delayed but this has been offset by healthy renewables, with improved solar production expected to make up the difference.

Movement on the gas curve varies this morning as demand levels are below average but a drop in supply has left the system short. Norwegian flows via the Langeled pipeline are reduced due to several outages at North Sea facilities, while storage withdrawals are at a steady 35mcm.

Day-Ahead power has displayed a considerable drop of £2.90/MWh this morning as stronger renewable generation and warmer weather have resulted in a healthy supply/ demand outlook for the next few days. Further along the curve a fall in coal and oil prices has resulted in downward movement.

Market close data has revealed that the 1-year forward price for commercial gas was unchanged, while commercial electricity climbed higher - closing at 42.18ppt and £42.63/MWh, respectively. This can be seen in the graph below. 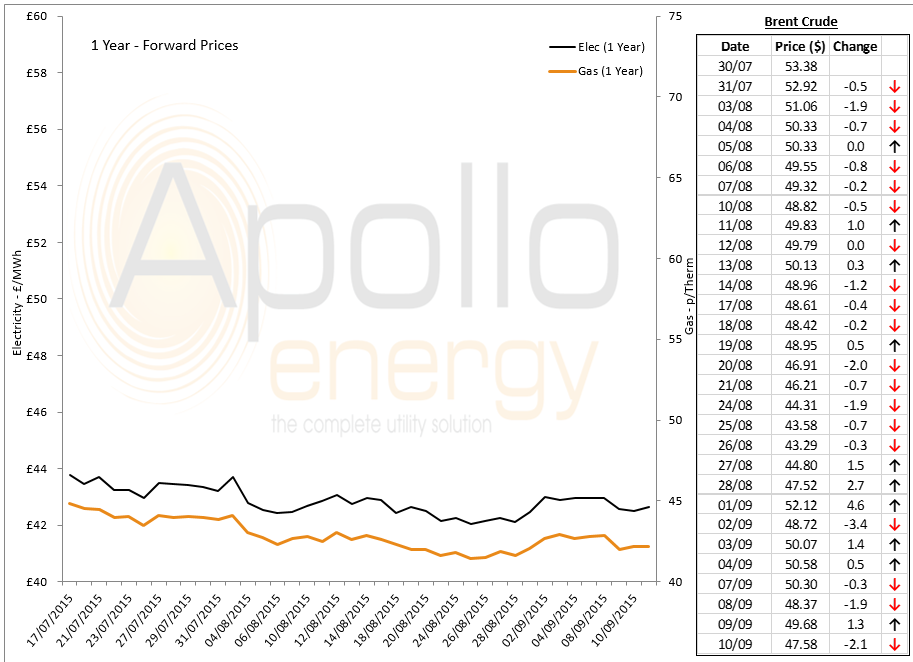 Brent 1st-nearby prices displayed a sizeable drop yesterday as the economic situation in China is still a concern and positive output figures released in the US did little to influence traders.