The outlook for spot power prices is stable for the coming days as no major changes to fundamentals are expected. Nuclear generation is slightly down this morning but remains healthy with the Tihange-1 nuclear reactor in Belgium expected to return on Sunday; wind generation is also set to rise next week.

Gas prices stabilised on Thursday as fundamentals were relatively unchanged with a drop in demand offsetting weaker Norwegian supply. Demand levels are expected to rise on Monday which has supported prices this morning, while North Sea supply also remains low.

The majority of near-curve gas contracts displayed small losses by the end of yesterday's session as demand levels were close to the seasonal norm. However, far-curve contracts increased due to stronger Brent. Elsewhere, flows via the Bacton Seal entry terminal were at 0mcm yesterday due to an outage at an offshore field.

Power contracts moved higher on Thursday with stronger carbon emission contracts a factor, with further support coming from a rise in oil prices. Generation levels were comfortable throughout the session and demand levels decreased but instead contracts were dictated by higher commodities.

Gas prices are generally higher this morning with demand levels forecast to increase at the start of next week as temperatures turn colder. The system is 5mcm short this morning following a drop in storage withdrawals and imports via the Langeled pipeline are low, providing further support to the bulls.

Day-Ahead power has increased as demand levels are expected to ramp up next week; the prompt currently trades at £42.40/MWh. Renewable generation is set to decline over the weekend but should return to healthy levels at the start of next week, while nuclear generation is also comfortable.

Market close data has revealed that the 1-year forward price for commercial gas increased, while commercial electricity was unchanged - closing at 42.44ppt and £42.63/MWh, respectively. This can be seen in the graph below. 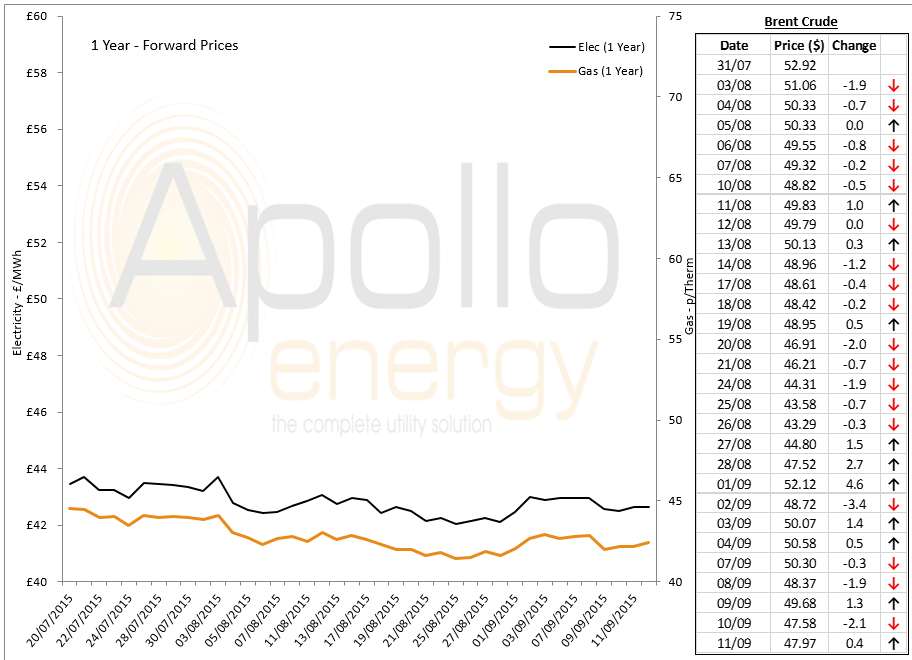 Brent 1st-nearby prices recorded gains yesterday but have fallen back below $50/b this morning on the back of a stronger US Dollar, despite the recent EIA report showing a rise in demand.