Spot power prices have decreased on the back of a healthier wind generation forecast, although cooler weather is expected to return to the UK next week which has provided some upward pressure; minimal movement is expected this afternoon. European gas prices increased yesterday due to an unexpectedly short UK gas system, despite a halt in exports to Belgium due to maintenance. UK gas demand is expected to fall by around 11% today due to warm temperatures and this has helped the gas system become balanced, resulting in downward movement for prices. Today's prices can also be found in an easy to read table on our 'current UK energy price' page.

Gas prices fell yesterday afternoon despite a strong opening following a halt in exports to Belgium, resulting in large quantities of gas left in the UK. However, the UK gas system was under-supplied due to an increase in storage injections and reduced LNG flows, restricting some of the losses. Power prices tracked the movement of gas and posted losses on Wednesday, with Front-Month displaying the largest drop of £0.35/MWh, closing at £41.75/MWh. Front-Quarter fell by £0.27/MWh, while movement on the far-curve was more subdued with Winter-15 closing at a £0.25/MWh discount.

Gas prices have decreased this morning, helped by lower demand levels which has resulted in a balanced UK gas system. Stronger Brent has limited some movement further along the curve but losses can be seen across the curve thanks to the healthier supply picture. Despite today's warm weather, solar generation is expected to be lower as much of the UK is set to be overcast, while wind generation is also forecast to fall by 35MW; providing some support to near-curve prices. However, overall movement is bearish with the majority of contracts influenced by their weaker gas counterparts.

Market close data has revealed that the 1-year forward price for both commercial gas & commercial electricity decreased - closing at 46.65ppt and £44.93/MWh, respectively. This can be seen in the graph below. 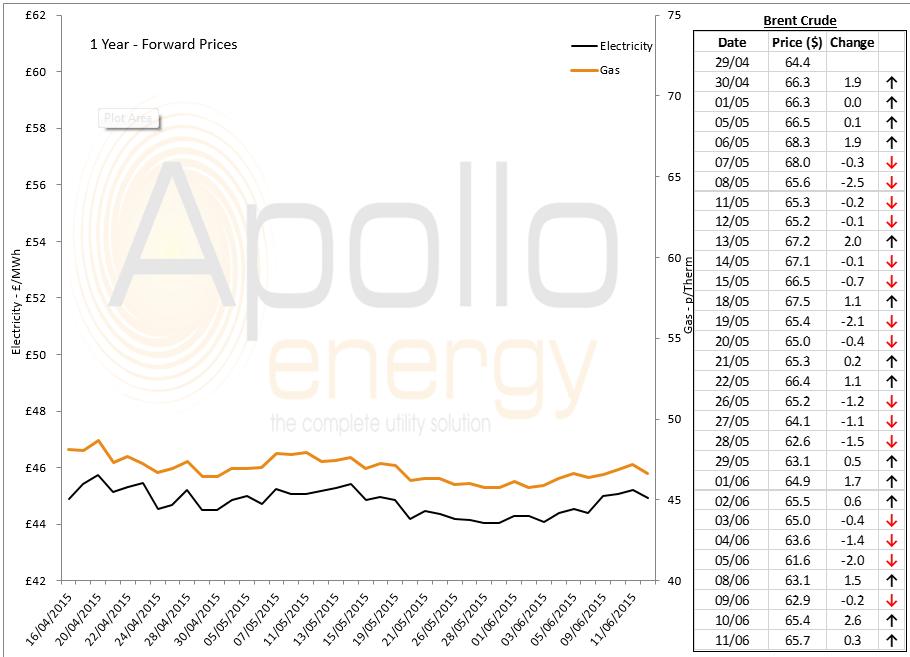 Brent 1st-nearby prices have climbed $3/b+ higher since Tuesday and posted another small gain overnight as prices remain above $65.5/b, with influence coming from a bullish EIA report.